Year in Review 2019: Most visible news websites in Australia

After another year packed with elections, breaking news, awards shows, cricket matches and more – we’re using the News Dashboard to reveal the winners and losers in Google’s news-related rankings for Australia during 2019.

First, we’ll look at changes to the mobile SERP (search engine results page) throughout the year.

The mobile ranking types for australia 2019

Starting in March, there was a fairly extreme increase in Video Carousels. This highlights the increasing importance of video in the SERPs – including for news keywords – and it doesn’t happen in a vacuum. To make more room for these carousels, fewer positions are open for other ranking types – you can also see this in corresponding decline of the News Box (Headline). We also see an increase in Publisher Carousels.

Overall, these are the most visible publishers in news.google.com for 2019:

Here’s a breakdown of the publishers who appeared in more than one Google News category for 2019. 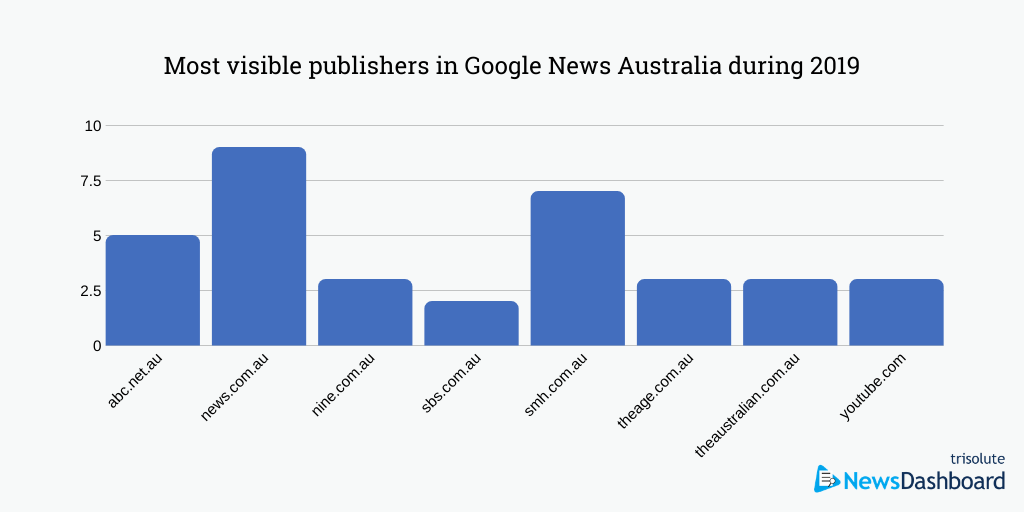 News.com.au was the most visible publisher in Google News Australia 2019!

For this ranking type, the Top 5 most visible publishers overall throughout the year were:

Three out of five are also among the most visible news sites in Google News – and one is a niche site (sports).

We can also see what an influence the UK media has in Australia rankings – for World keywords, both theguardian.com and bbc.com are among the most visible. They’ve also drastically increased their visibility over the course of 2019.

Space.com was the most visible publisher in the Mobile News Box in Australia for the category “Science”.

An America publisher – cnet.com – also appears twice in our Mobile New Box analysis – for the Technology and Science categories.

According to News Dashboard data, 86 percent of desktop SERPs in Australia contained a News Box across in 2019, which is an increase from 83 percent in 2018.

The median age of articles in the Desktop News Box was anywhere from eight to 13 hours in 2019.

In our Desktop Visibility Overall report – which includes Desktop News Box and Video Carousels – we have a few similar publishers to Google News and Mobile News Box:

The most visible publisher in the Desktop News Box in Australia was youtube.com.

We see YouTube appear often in the Australian and U.S. news-related rankings, but much less in the UK rankings.

Year in Review 2019: Most visible UK news websites on Google

What U.S. news website had the highest Google News visibility in 2019?