13. May 2022
By Jennifer Helmig service@newsdashboard.com

With the French  presidential elections just being over and the news-publishers finally getting some rest again, let’s take a look at what happened in the Google News Boxes in 2021. Who dominated which ranking? What did each News Box category look like? And what has changed in the last five years? Êtes-vous prêt? Allons-y!

As always all ranking data is based on our crawling interval of 15 minutes – monitoring the news as they break. Furthermore, you should be aware of our weighted visibility taking in consideration not only if there is a News Box ranking but also how visible the ranking is to the user. For this analysis we chose only our freshest keywords – based on the most newsworthy and trending Google News and Trends topics. This makes comparing competitors a breeze. If you want to find out more about your own SEO statistics contact us now.

First we’re going to take a look at the year 2021, both for desktop and mobile News Boxes.

In the desktop News Box, Le Monde and France Info are both pretty high above their competitors with Le Monde winning the race overall. On position three to five, there is quite a tight race going on between Le Figaro, 20 Minutes and BFM TV. Overall, the most outstanding part of the graph is the continual change of France Info and Le Monde between the first and second place starting in July 2021 and continuing for the remainder of the year.

Overall ranking in each category

Let’s now look at the data we collected for the mobile News Box in 2021. Flying high above the competition is France Info. That is, at least, until September, when Le Monde displays a heavy ascent from last to first place. At the end of the year, France Info wins the pole position again after all. 20 Minutes and Le Figaro are in a close head-to-head all year long, with Le Figaro winning by a margin. Place five goes to BFM TV.

Overall ranking in each category

The most obvious curve in this graph is Le Monde’s. With its peak in May 2017, it stands far above all other publishers in that tier. Afterwards, the curve falls quite strongly though, putting them in second place for the month of August. Luckily, they can recover shortly thereafter and remain in first place for the remainder of the year. In November, Le Figaro also displays an obvious peak in its curve, leading to them ranking in second place in that month. In December, they fall back down on third place unfortunately. The fifth place goes to on of France’s most renowned publishers Le Parisien, who did not make it into 2021’s News Boxes.

Below you can see the top five publishers in 2017 measured by their number of rankings and for better comparison, you find the publishers on the same position in 2021 in the blue brackets. 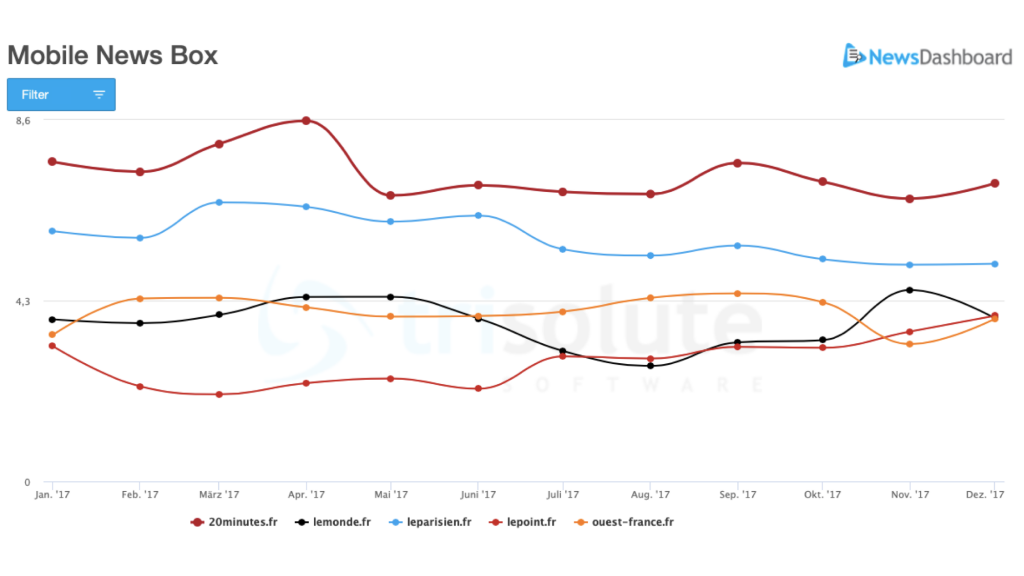 20 Minutes dominated the mobile News Boxes for the entirety of 2017. Except of a slight dip in May, their curve stays quite even. Relatively closely in second place follows Le Parisien. Places three, four and five go to Ouest-France, Le Monde and Le Point. The only two publishers that remained in the  highly contested top five of the mobile News boxes in 2021 (in comparison to 2017) are 20 Minutes and Le Monde.

Again the hint: the blue brackets show you the publishers in the same places in 2021.

Lastly, let’s have a look at the five-year-reviews of both the desktop and mobile News Box to examine the course of the top five publishers’ rankings from 2017 to 2021.

The rankings are tightly interwoven. Let’s therefore focus on the protruding part: What is going on in the timespan from May until November 2018? Le Monde experiences its absolute peak (plus the highest rankings of the entire five-year-span) in June and July 2018. Both France Info and 20 Minutes also had their peaks at that time and almost skyrocket from May to June. As if this wasn’t interesting enough, for L’Équipe you can see the exact opposite phenomenon: In July 2018 they suddenly plummet far below their competitors for two months and then suddenly do up again – fascinating! Our best guess that it had something to do with one of the biggest Google Core updates yet in the summer of 2018.

Alright, we’re almost done. Lastly, let’s have a look at the five-year-review in the mobile News Box.

Similar to the desktop News Box, the year 2018 kind of juts out for most of the top five publishers. 20 Minutes reaches its own as well as the overall peak from June to September 2018 and then falls down again. Le Parisien displays a similar behaviour, though their curve is overall a bit lower than 20 Minutes’. Ouest-France and Le Monde show slight peaks at that time, but they are not as noticeable as their two competitors’ ones. France Info stays consistent at the same time. Their curve shows a highly interesting twist in 2019 though: In July they skyrocket from last to first place and stay at the top for almost the entirety of the following measured time.

In terms of variety, France Info again performs magnificent: In the mobile News Box they are in the top five in six out of nine categories, in the desktop News Box in five out of nine. Other noteworthy publishers that showed great variety in 2021 are Le Figaro, 20 Minutes, Le Monde and BMF TV.

Congratulations to all the above mentioned publishers that made it into the top five. Great job!

You’re not yet part of the News Dashboard-family? Sign up here for a free demo!