When you check for data 96 times a day, you have a LOT of it. In this case, the News Dashboard revealed the most visible publishers for Google News and the News Boxes (so-called Top Stories Boxes) on the Google search engine results pages (SERPs) in 2018.

Read on to get a breakdown by ranking type and even category – as well as a bonus section on Accelerated Mobile Pages, or AMP. And if you’d like a refresher on the finer points of news SEO and Google News, start with our basics guide.

If you’re not familiar with the News Boxes on Google’s SERPs, below are examples on mobile and desktop:

Here, we are looking at 2018. We’ll break it down by category below. Only one vertical publisher is included in the Top 10 – theverge.com, which is a technology news website owned by Vox Media.

CNN is at the top of both ranking types!

Next, we’ll reveal which publishers were most visible in the News Boxes for keywords. A bold publisher name indicates that this publisher ranks only in the Top 5 of one device (desktop or mobile) in that category.

Top 10 publishers in 2018 for all Google News categories

In May 2018, Google released a redesigned Google News (news.google.com). In addition to a radical new look for the Google service, many back-end and algorithm changes were made.

You can see when the Google News redesign was implemented by the massive visibility change concentrated in one month during 2018.

The previous front-runner, washingtonpost.com, saw a sharp decrease. We theorize that part of the drop was due to Google including a greater variety of publishers in news.google.com, which leaves a smaller number of rankings available to each and every single publisher.

The change was also aggravated by the skyrocketing visibility of YouTube, as Google vowed to include more video in Google News. It’s Google’s only choice of video platform. Of course, YouTube does not actually produce any of the content – including news videos. The News Dashboard intentionally shows YouTube at the “publisher” level so our customers can see its overall visibility, but you can also drill down to see which publishers are responsible for creating the videos that ranked.

Using the News Dashboard, you can read the actual news publishers who are responsible for producing a YouTube video: 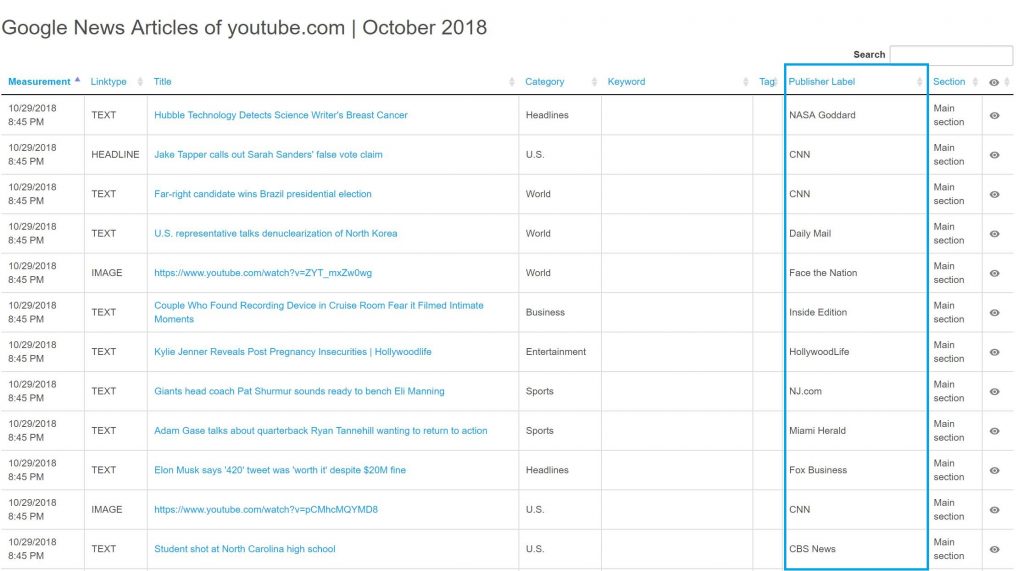 Finally, all of the above publishers are included in the mobile and desktop News Boxes most visible publishers, except YouTube.

Next, we again reveal which publishers were most visible, broken down by category, this time for Google News.

We see a few news websites that have not yet appeared in our year in review:

So, there are only two categories that do not include youtube.com as a Top 5 publisher: Business and World.

Most visible publishers and AMP

Google has all but clearly said that using the AMP (Accelerated Mobile Pages) on articles is necessary to have significant visibility on the mobile SERPs, including the news-related ranking types.

Of the Top 20 most visible publishers in the Mobile News Box, only one had an AMP percentage below 50 percent: espn.com, with 14 percent.

Out of the Top 10 most visible publishers in that same ranking type, the lowest percentage was 55 percent for nytimes.com.

Overall, the biggest changes in the news-related ranking types in 2018 are the Google News redesign, the rise of video and YouTube video visibility in Google News corresponding to the redesign, and the complete domination of cnn.com as the most visible publisher in almost every ranking type. We look forward to seeing what’s developing in 2019! 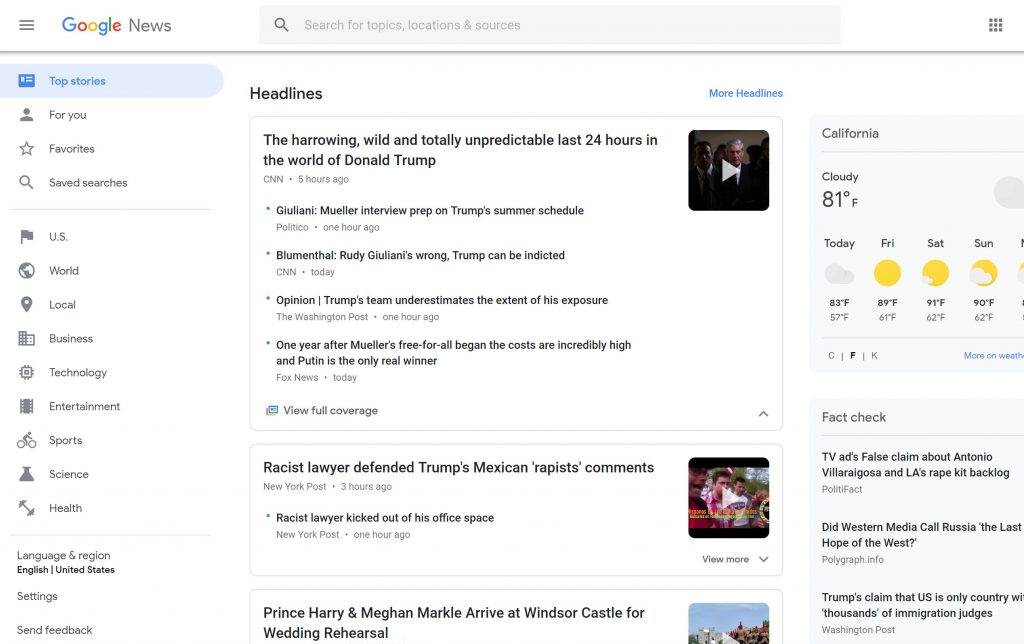 We collect our news-related keywords from Google News (news.google.com) as well as Google Trends, and keywords are from Jan. 1-Dec. 31, 2018, for this analysis. News: Business, Entertainment, Health, U.S., Science, Sports, Technology, Top Stories and World. 15 minutes and checks rankings on Google News every 30 minutes.