Countless stories of an unforgettable year were written, published and searched for on Google, and the Trisolute News Dashboard tracked it all for you.

As we share the 2021 data with you, we also took a new approach to our analysis. In addition to looking at the top five most visible news publishers in Google’s news rankings, we also compared the data going back five years. Find out who placed in the top 5 for 2021.

Top 5 most visible news publishers: YouTube soars over the competition 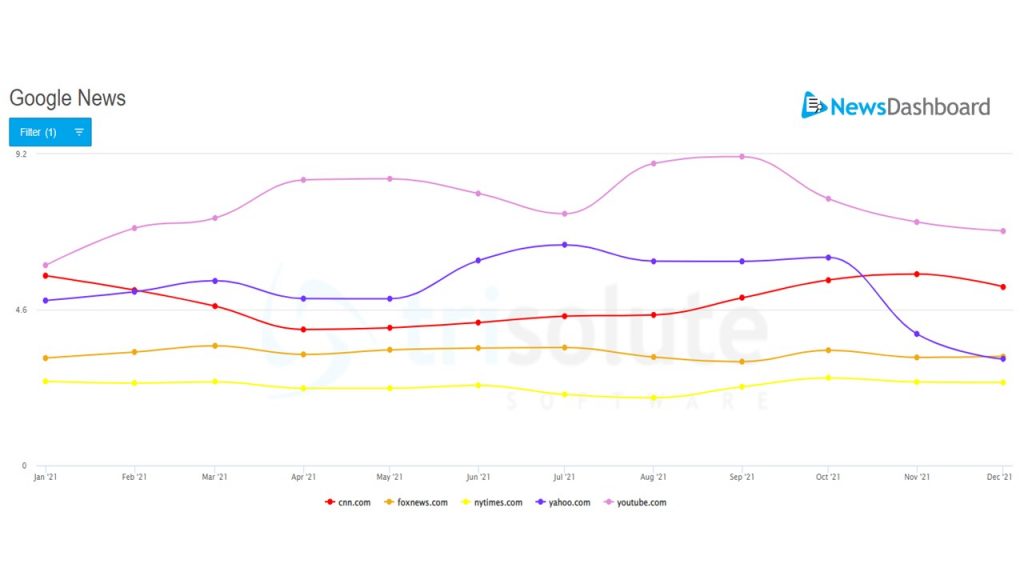 Video continued its hold on the rankings in Google News in 2021.  YouTube – which of course is a platform and not a publisher – held the top spot as the go-to video platform in Google news. While Yahoo’s visibility pushed ahead of CNN earlier in the year ,  it steadily declined falling slightly below Fox News allowing CNN to take over.  The New York Times rounds out the top five for Google News visibility in 2021.

Comparison: Who were the top 5 publishers 5 years ago? 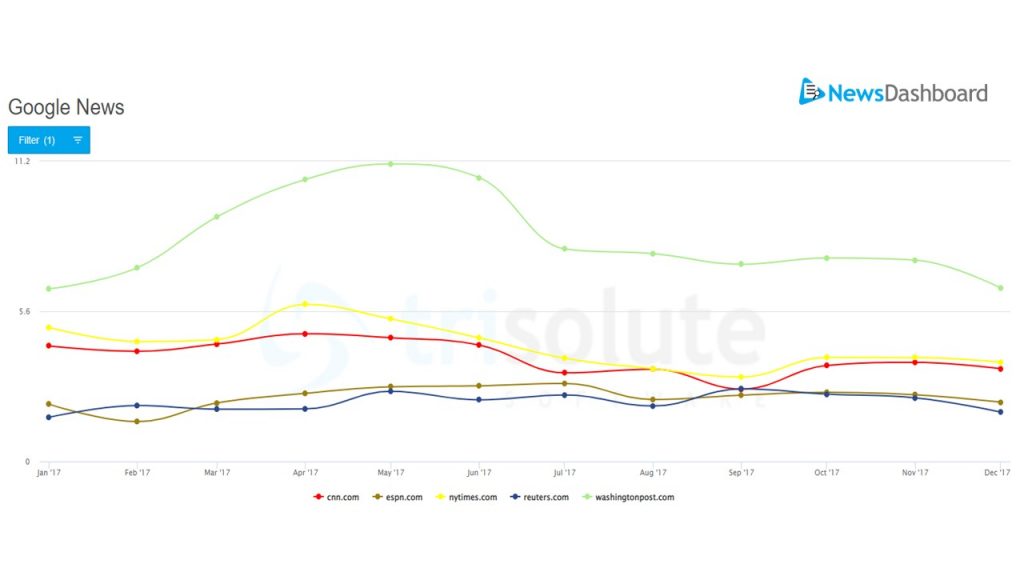 As we look back at the data from five years ago, the top 5 publishers for 2017 were certainly different. The Washington Post was far and above the most visible publisher, but did not even factor into the top 5 for 2021. The New York Times and CNN  were the only publishers who still ranked 5 years from now in 2021. ESPN and Reuters battled it out for 4th and 5th positions. One of the most obvious names missing in 2017 is YouTube. We discuss this below: 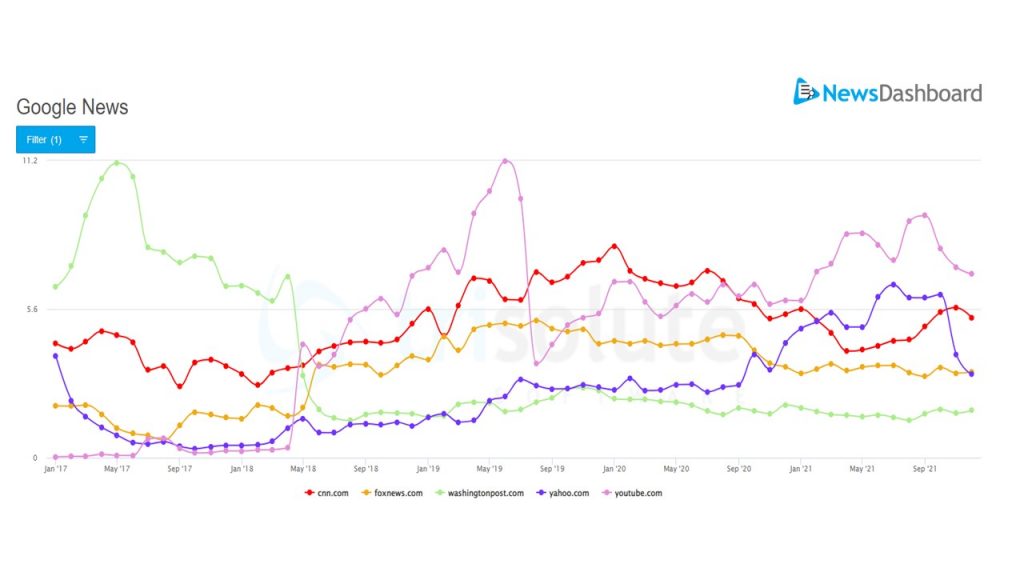 In May 2018, Google News in the US received a major overhaul and would be including more video in Google News, primarily coming from Google-owned YouTube. Yahoo sharply declined at the beginning of the 5-year period, then gained traction until the end of 2021, where it suddenly dropped significantly ending in fourth position. The Washington Post, which soared above their competition for a year and a half, ended up maintaining 5th position overall from May 2019 until the end of 2021. This 5-year snapshot truly showcases how volatile the news landscape can be and how a shift in Google’s priorities can benefit one publisher’s visibility over another.

Breakdown by Google News category in 2021

These were the top 5 publishers for each news category in Google News:

For the search engine results page (SERP) reports, we analyzed using our general keyword set, composed of keywords from Google Trends and Google News, as well as Trisolute Selected keywords These keywords are what the News Dashboard automatically imports into the Keyword manager. We also looked at all news-related rankings which include all news box types, video and publisher carousels, live blogs and organic which appear on the first page of the SERP.  Here’s the 2021 view: 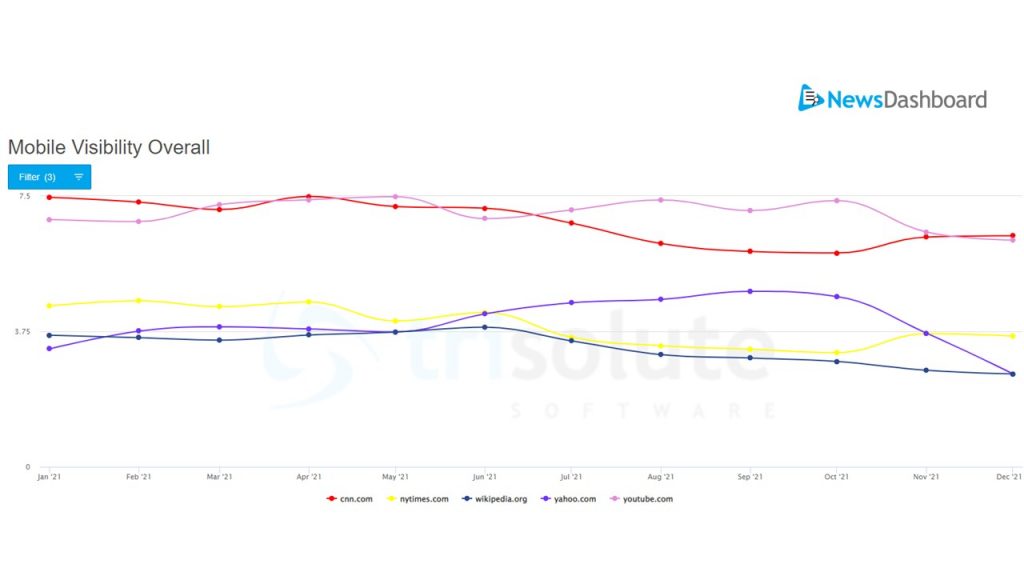 This graph shows a clear divide between the top two publishers and the rest of the competition. However, this rivalry didn’t always exist. 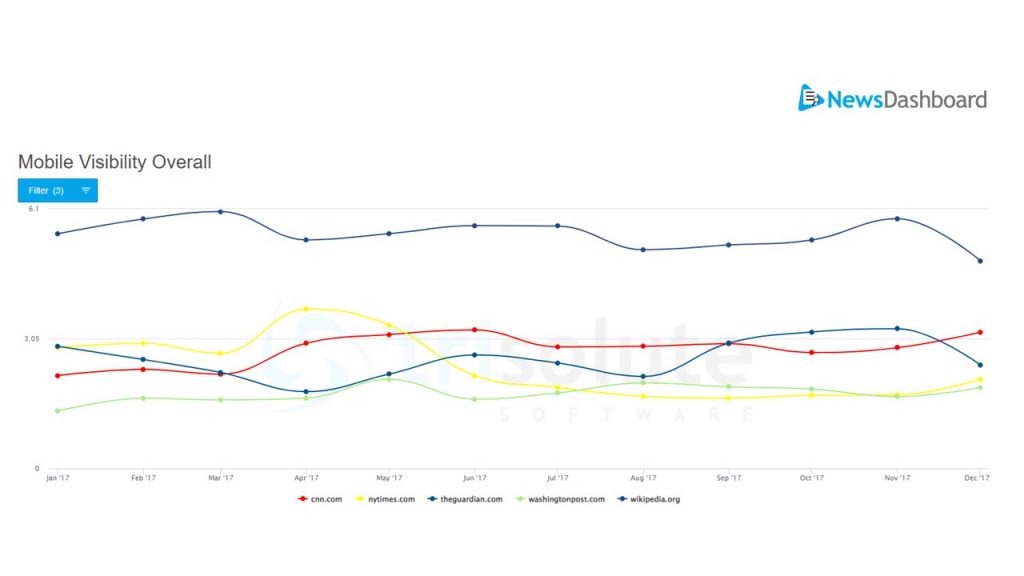 Let’s compare with 2017. Again, we see YouTube not even factor into the top five; and Wikipedia dominated mobile visibility. Beginning in 2016, the tool began tracking mobile organic rankings. Wikipedia has an article on almost anything, making it by far the most visible publisher across all keywords we crawled. It is interesting to note that five years later, The Guardian and Washington Post drop out of the top 5 and are replaced by Yahoo and YouTube. 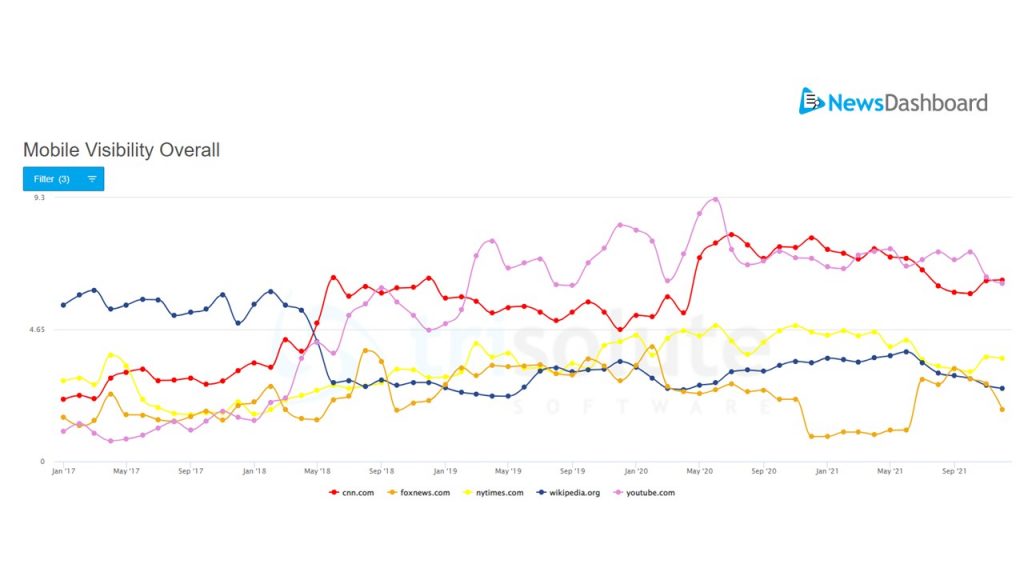 The final Mobile Visibility Overall graph shows data for 2017 through 2021. Wikipedia, YouTube and CNN each hold the top position at different times over the 5-year period. In 2019, YouTube took over the top position as video content occurred more on the SERP via Video Carousels.

These were the top 5 publishers in each category for 2021.

We continued to use the general keyword set and tracked all news ranking types, including organic. Here’s 2021: 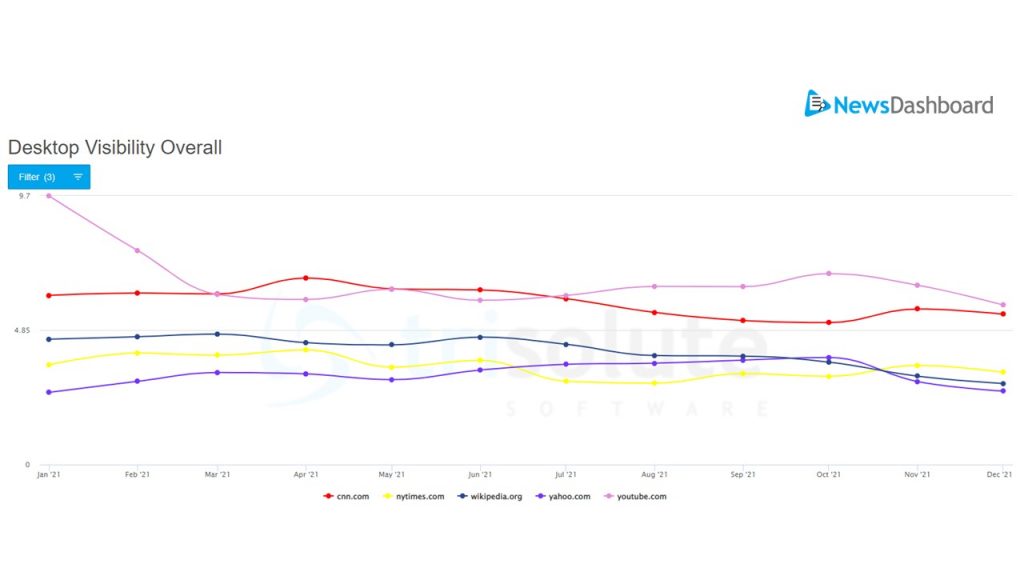 YouTube began and ended in 2021 with a strong lead over the competition.

Comparison: From zero to hero 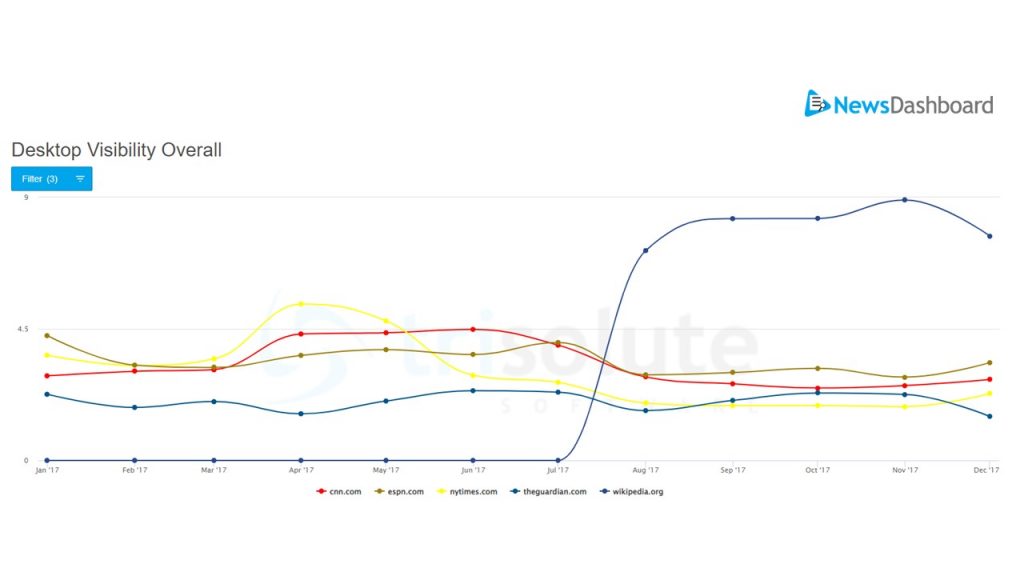 When we look back to 2017  we see a flat line for Wikipedia until August.  In order to understand this, let’s look back at a bit of News Dashboard history. The first US ranking was crawled Sept. 29, 2015, but only tracked rankings in Desktop News Boxes. Then in August 2017, we started crawling for organic and other rankings which explains the sharp increase in visibility. The remaining four publishers held their positions pretty steadily during 2017.  Of the top 5 for 2017, only CNN, The New York Times and Wikipedia continue to rank 5 years later. 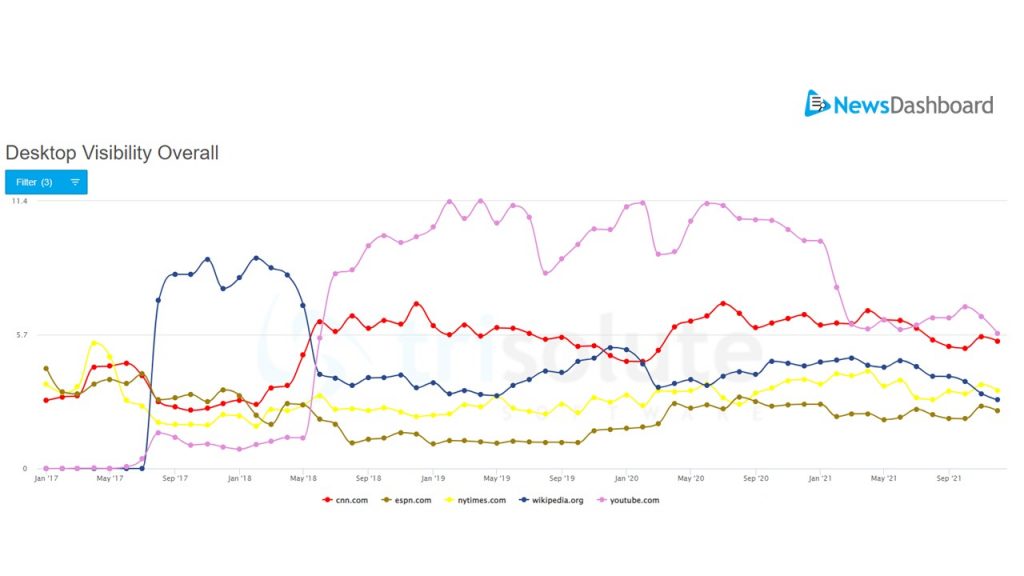 Significant change happens in May of 2018. This is when Google launched its AI -powered redesign for Google News, which put a heavier emphasis on photos and videos, including YouTube. This change seemed to have a significant impact on desktop visibility overall for SERP, resulting in YouTube holding the top position over its competition.

What it all means

Overall for 2021, we see that video content surged in Google News with YouTube as the clear winner. YouTube may not be a news publisher in the traditional sense of the word, but it is the top platform for publishers to post their video content and by far the most visible way to put video into Google. In order to remain competitive, publishers with video content may want to strongly consider having a YouTube presence.  For mobile and desktop visibility, CNN gave YouTube a run for their money as they both fought for the number one position. For topic coverage, specifically health, we can see cdc.com ranking in the top 5 in third position for the SERPs. However, it did not rank for either Health or Covid-19 categories in Google News. The top contenders 5 years ago looked very different. In Google News, The Washington Post was king and in mobile visibility, Wikipedia owned organic rankings and therefore owned the field. When Google News received a major overhaul in May of 2018, CNN found a way to stay visible and relevant along side YouTube. Finally, it’s important to note that at the end of 2021, we do see a decline in visibility for most of the top 5 publishers in all areas. In both Google News and desktop visibility, YouTube, CNN and Yahoo are all declining into 2022. It will be interesting to see what plays out for these publishers going forward.

If you haven’t yet looked into Google Discover, this should also go onto your 2022 to-do list. Google Discover is exclusive to mobile and helps readers “discover” content based on what they are searching for and their preferences. In a recent post from Google, when describing the difference between Google Search and Discover, they said, “Discover surfaces content primarily based on what Google’s automated systems believe to be a good match with a user’s interests.” You can easily find Google Discover on your Google mobile app on your phone as shown on the image below.

Publishers can look to potential traffic from Discover as a supplement to a more solid SEO strategy in Google News and the SERPs. To learn more about Google Discover, check out this handy article from WTFSEO Substack for the latest.