Top 5 publishers for the inauguration on Google in 7 pictures

And now it is not Mr. Trump anymore, but Mr. President. After covering all the debates throughout the election campaign and election day, we are now presenting you our coverage of the inauguration of Donald Trump in Google News and the News Boxes.

Throughout this analysis we will convey our information with screenshots of the News Dashboard and screenshots from Google SERP and Google Trends, so you see what we work with and everything our customers can easily use as well.

For this analysis we will focus on the time span between the day before the inauguration until Sunday – 01/19/2017 – 01/22/2017. We will see any beforehand coverage and all the resulting news right after. To monitor these things we have used a keyword set consisting of 40 terms describing attendees, artists, events at and around the inauguration, places and more. As always you will find the full set of keywords at the bottom of the text. We will start by showing you the Google News Boxes and Google Trends for a special keyword at the exact time of the inauguration – 01/20/2017 12 pm. After that we will move on to the top publishers of the Google News Boxes for desktop for all four days. But, the focus will be on mobile visibility. We will go from all mobile boxes to the specific AMP Carousels for all days and finish with a comparison for only the inauguration day in the AMP Carousels, giving some insight into detailed coverage. 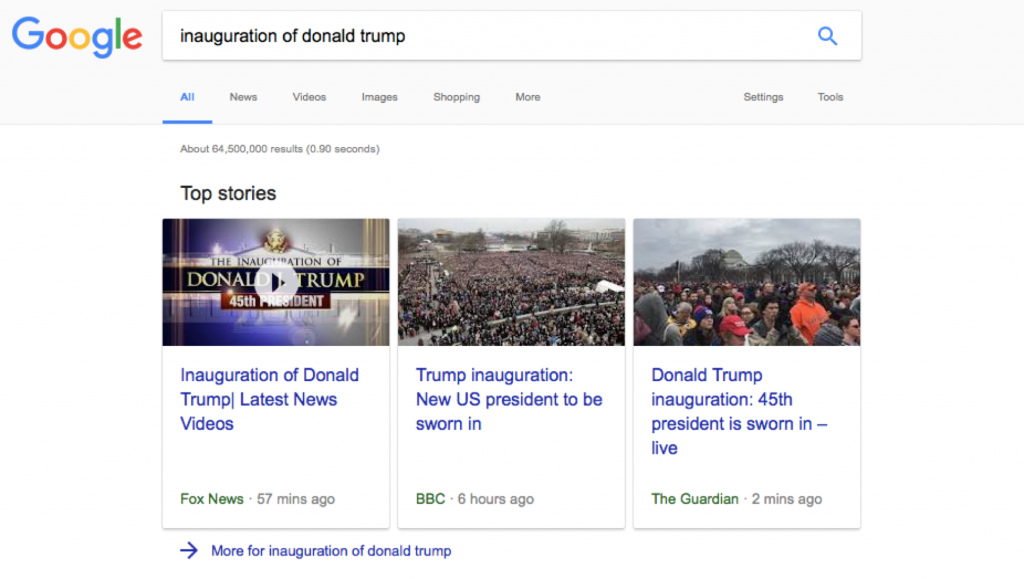 Live desktop News Box at the moment of Trump’s inauguration.

Above you see here the desktop News Box for “inauguration donald trump” on the 20th of January on 12 pm EST – the time of the inauguration of Donald Trump. Here we see foxnews.com, bbc.com and theguardian.com – they do not make the top 5 for the desktop News Boxes for our set in general over all four days, but that does not mean all News Box visibility is only divided between the top 5. It just means these 5 publishers are featured in most News Boxes for the chosen keywords.

Right below the News Box that was mentioned above one could find another Desktop SERP element on Google – a twitter strip with the newest tweets for the above mentioned search term. Google has created several news related and non news related SERP elements in the past and will surely continue to do so in the future. As always we keep up to date with the newest developments and add the relevant ones to our tool, helping our customers to stay up to date with their SEO strategies.

This one is the last Google screenshot that we have taken into account for this analysis. It is a 7 day overview on Google Trends US for the keyword “inauguration of donald trump”. This shows how interested, measured by searches in Google, the US internet users were in this specific keyword. This gives us a slight idea on how to weigh different days according to the amount of views one could generate from their visibility and an effective Google News SEO. As you see the days before and after the inauguration are still interesting, but the most important day is clearly the day of the inauguration.

Another interesting fact one finds on Google Trends is that the third most researched keyword in the USA on Thursday was “inauguration” with over 2,000,000 searches over Google, showing how close to the most interesting news we are with our keyword set. 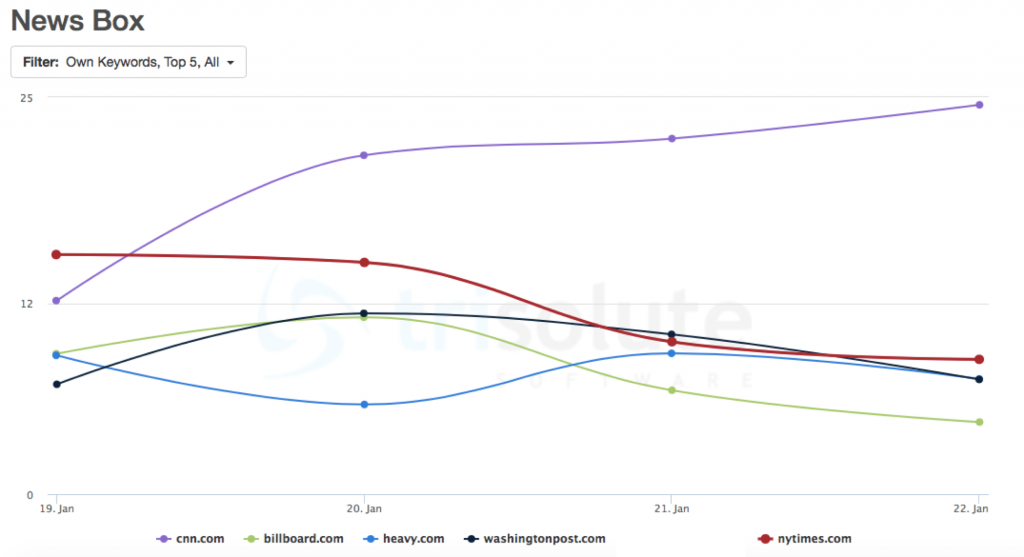 Nytimes.com starts in front of cnn.com, but cnn.com continuously develops over time.

Let us now get into the visibility analyis for the Google News Boxes for desktop.

While cnn.com start on second position with 12.18 percent visibility, they soon make their way up the ladder and they gain over 20 percent over the next 3 days straight. They finish on Sunday with a maximum score of 24.51 percent. So even though they are not in the screenshot of the News Box earlier mentioned, they performed strong over all days.

On Thursday nytimes.com starts in front of cnn.com with an advantage of 2.91 percentage points. Even though they are overtaken, they stay stable on Friday around 15 percent, but then drop down to a score around 9 percent for Saturday and Sunday.

Though washingtonpost.com start on fifth position with only 6.92 percent, they take it up a notch the next day and reach score of 11.39 on the most important day. This certainly makes up for their visibility’s loss over the weekend. They are back to their starting value on Sunday.

Another interesting aspect for this part is that usatoday.com do incredibly well on the 19th, but then lose so much visibility that they still make the top 10, but not the top 5.

We will now switch from desktop to mobile SERP for the next part. 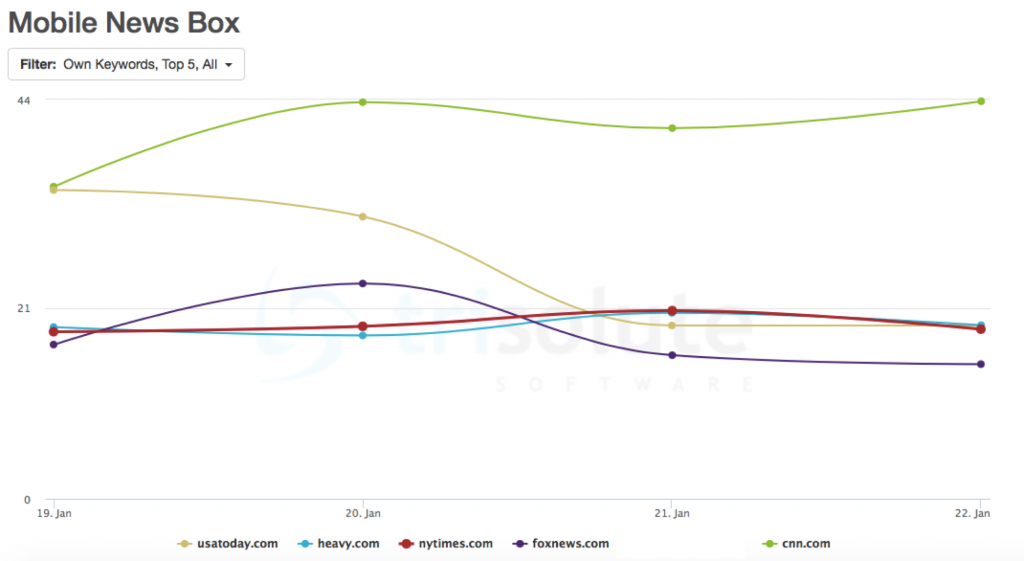 A skyrocketing performance of cnn.com in the mobile News Boxes.

The new players in the top 5 of the mobile News Boxes are usatoday.com and foxnews.com. Billboard.com does not score a place in the top department here, but washingtonpost.com still makes the top 10.

Again the winner is cnn.com. Though, they experience their weakest visibility on Thursday, they still manage to grasp first position with 34.40 and they keep it strong until the 22nd with a maximum of 43.81 percent on Sunday. The absolute figures are high as the mobile carousel (AMP and non-AMP) have 6 to 10 possible elements, so the chance to be ranking in a mobile News Box is relatively high.

Usatoday.com starts the 4-day-period of with a promising score of 34.02 percent and on one level with cnn.com. They stay a strong silver medallist on the 20th, but mesh with the competition over the weekend.

Foxnews.com starts only on fifth position with 16.99 percent, but they save themselves a place on the podium for Friday with a visibility of over 20 percent. They drop back down to their initial value for the last two days.

Nytimes.com and heavy.com stay pretty close on all four days with a difference of barely 1 percent between them, reach their peaks on Saturday and they keep it steady overall. 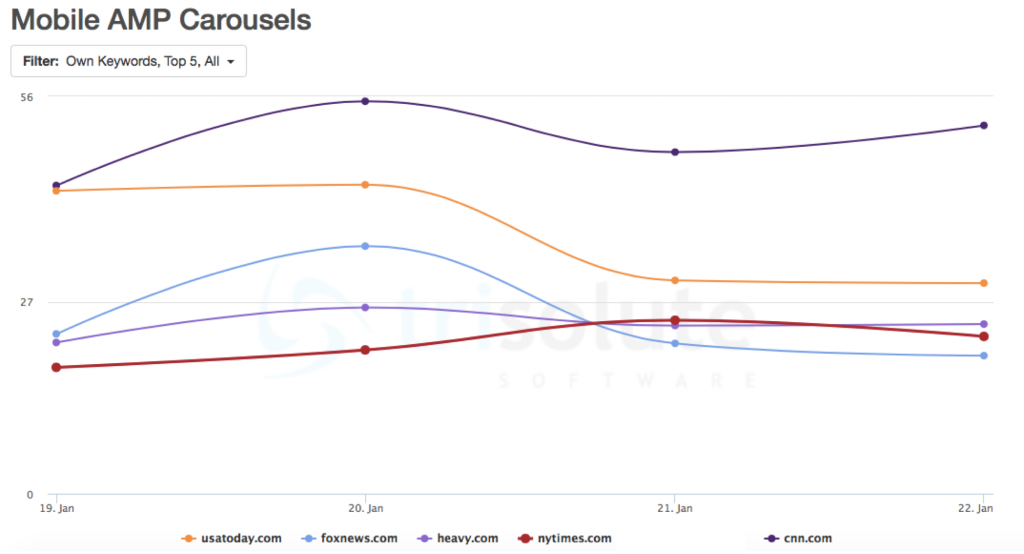 Usatoday.com stays a great runner-up throughout all four days.

As one sees, we have the same players taking a similar course with minor differences in the AMP Carousels. This similarity between the mobile News Boxes and AMP Carousels shows once again that the AMP carousels are already the most important elements of the mobile News Boxes. It also shows how important AMP articles have become for the publisher visibility on mobile devices.

So once again we have cnn.com on first position with a minimum of 43.43 on Thursday and a maximum of 55.30 on Friday.

Usatoday.com takes second place and scores around 43 percent on the 19th and 20th of January. But, on the weekend they drop almost 13 percent and score around 30 percent – a score that is still impressive.

Foxnews.com is on the podium for the day before the inauguration and the day of the inauguration, where they reach their maximum of 34.89. However, on the weekend they stay near 20 percent.

Surprisingly heavy.com and nytimes.com split during Thursday and Friday in the AMP Carousels and heavy.com scores near 4 percent more than the competitor on both days. Clearly nytimes.com reacts and overtakes heavy.com with a smaller difference over the last two days. 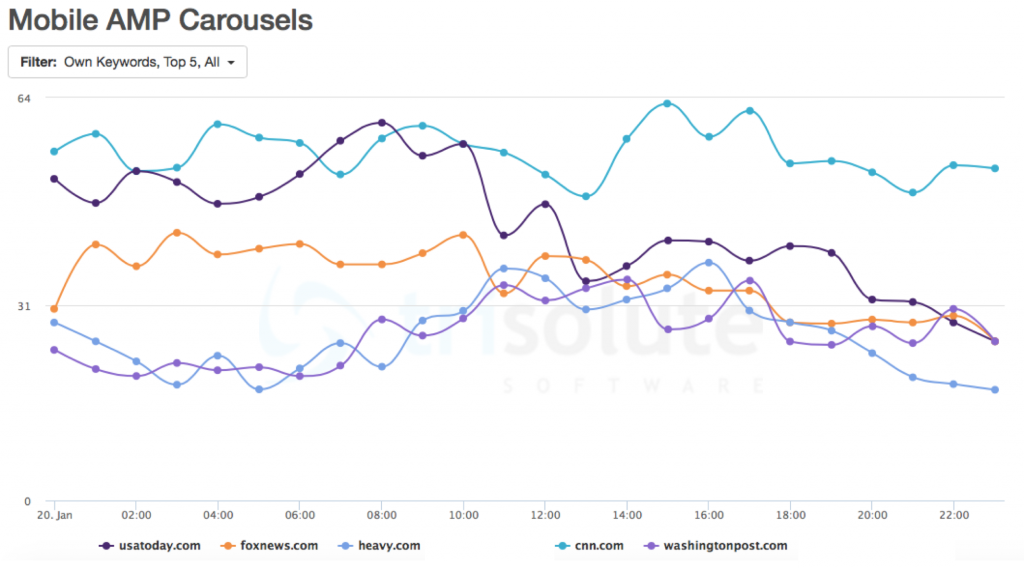 Close field in the afternoon, though cnn.com stays on top of the competition.

For the last part we want to show only the inauguration day in the AMP Carousels. While we normally choose to divide or analysis parts by publishers, we chose to look at 3 time spans over the day for this last part.

But first, we have to acknowledge that washingtonpost.com is in the top 5 for this day, while nytimes.com makes the top 5 for all 4 days, but not on this particular day.

Let us now look at the curves between 12 am and 8 am. It is a close call between cnn.com and usatoday.com. The middle is dominated alone by foxnews.com on third position and heavy.com and washingtonpost.com are in a rivalry over the fourth and fifth position.

Moving on to the period between 8 am and 4 pm it gets clear that cnn.com takes the lead, while the rest of the field settles in the middle next to foxnews.com.

In the last 8 hours (4pm – 12am) cnn.com stays on top and the rest of the field stays close together, but their values decrease a bit overall. This means that other competitors that are not in the top 5 have gained visibility during that time.

Let us now finish this analysis off with some closing remarks:

Especially cnn.com, but also nytimes.com and heavy.com are strong in both the mobile and desktop SERP. Usatoday.com is not in the top 5 for desktop News Box visibilty, but shines together with foxnews.com in the mobile region. Billboard.com and washingtonpost.com are at this time extremely strong for desktop, but could improve even more for mobile.

With the analysis of the general mobile News Boxes compared to the AMP Carousels, we have shown on one example how important AMP articles are already for the publishers’ visibility in the mobile SERP.

We have also seen that the one day view can show a different field of ranking publishers than the overall view for all four days. Being strong one day, does not automatically mean one stays strong for all days – News SEO is not only a day to day challenge, but also a long term activity.