Super Bowl LIII: CBS Sports, NFL and ESPN among the most visible publishers in Google

Most eyes were on the New England Patriots and Los Angeles Rams  during Super Bowl LII, but those in news SEO had a different interest: Which news publisher had the highest visibility for the game in Google’s news-related ranking types?

The News Dashboard helps answer that question below. Our analysis looks at Wednesday, Jan. 30 through Wednesday, Feb. 6.

The News Dashboard is a search engine optimization and analytics tool that provides data in near-real time to news publishers. Our tool does this by crawling the Google search engine results pages, or SERPs, every 15 minutes to reveal Google search visibility.

For reference, see the News Dashboard set keyword we selected for this analysis: 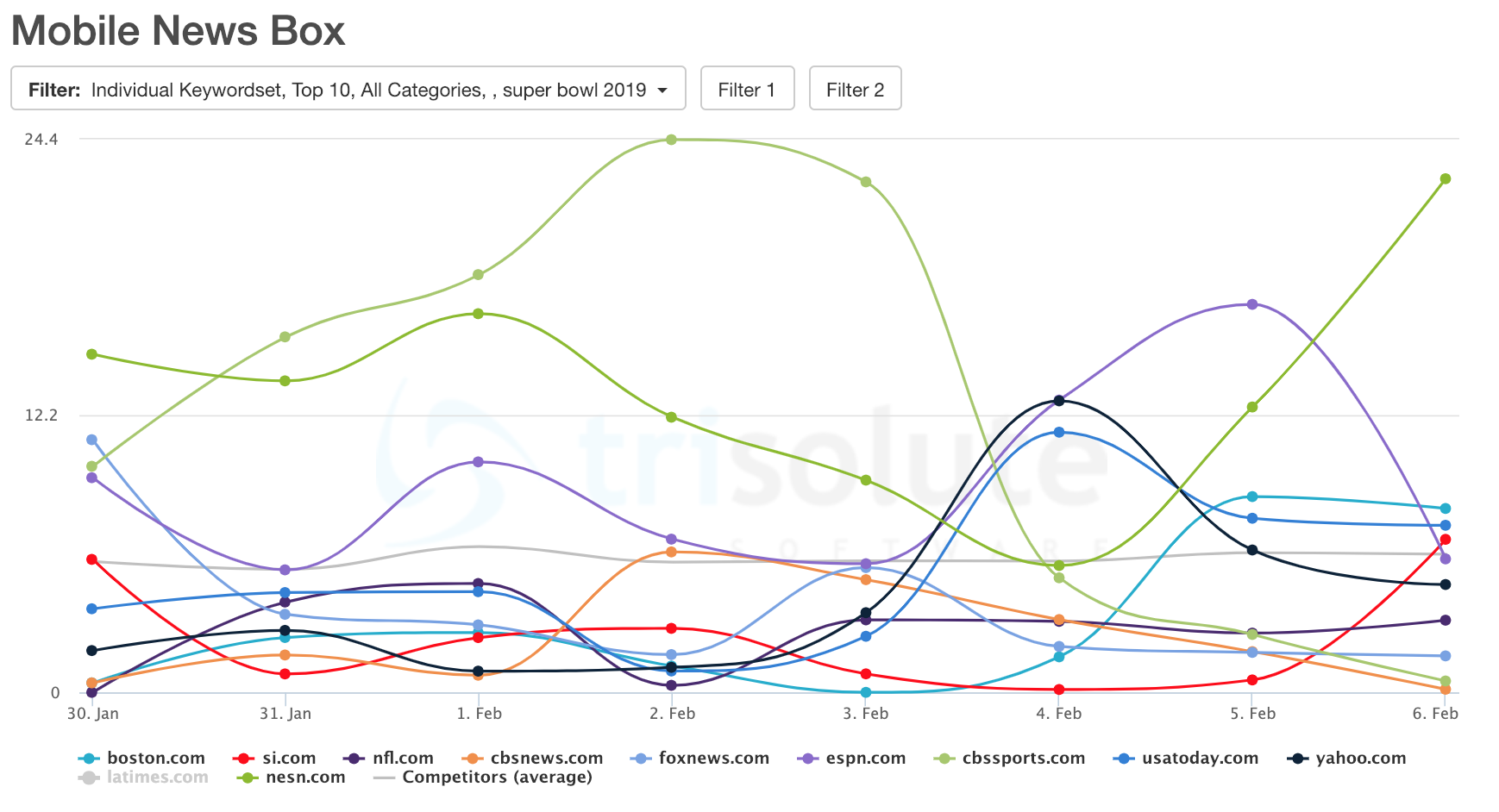 The ranking type we looked at here is the News Boxes, also called Top Stories, that appear on the mobile Google search engine results pages (SERPs).

cbssports.com does a great job of maintaining visibility in the ranking types we reviewed. This part of the analysis specifically looks at the Mobile News Box and all the Google news categories.

On Super Bowl Sunday, they have a visibility score over 20 percent. Following them is nesn.com, which has less than half of the visibility of cbssports.com. Also, a couple of the top publishers cover more than the sports vertical.

Below is each publisher’s top keyword and visibility percentage for Sunday, Feb. 3: 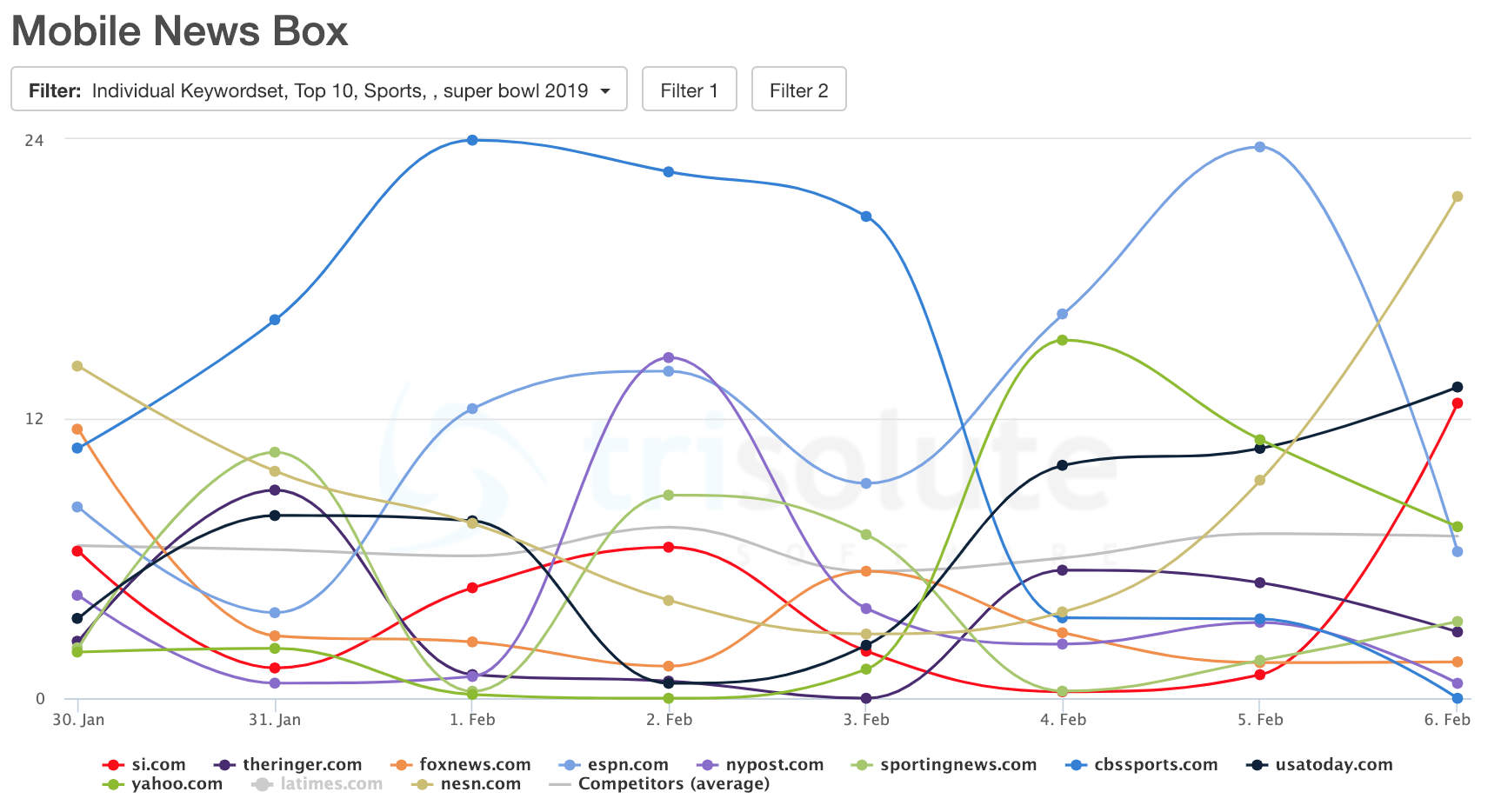 Next, we zoomed in on the Sports category. espn.com had continuing coverage of the Super Bowl, taking over the top spot in the days after the big game.

Again, below is each publisher’s top keyword and visibility percentage for Sunday, Feb. 3. Here, the keyword “super bowl todd gurley” was at the top for the No. 1-3 publishers: 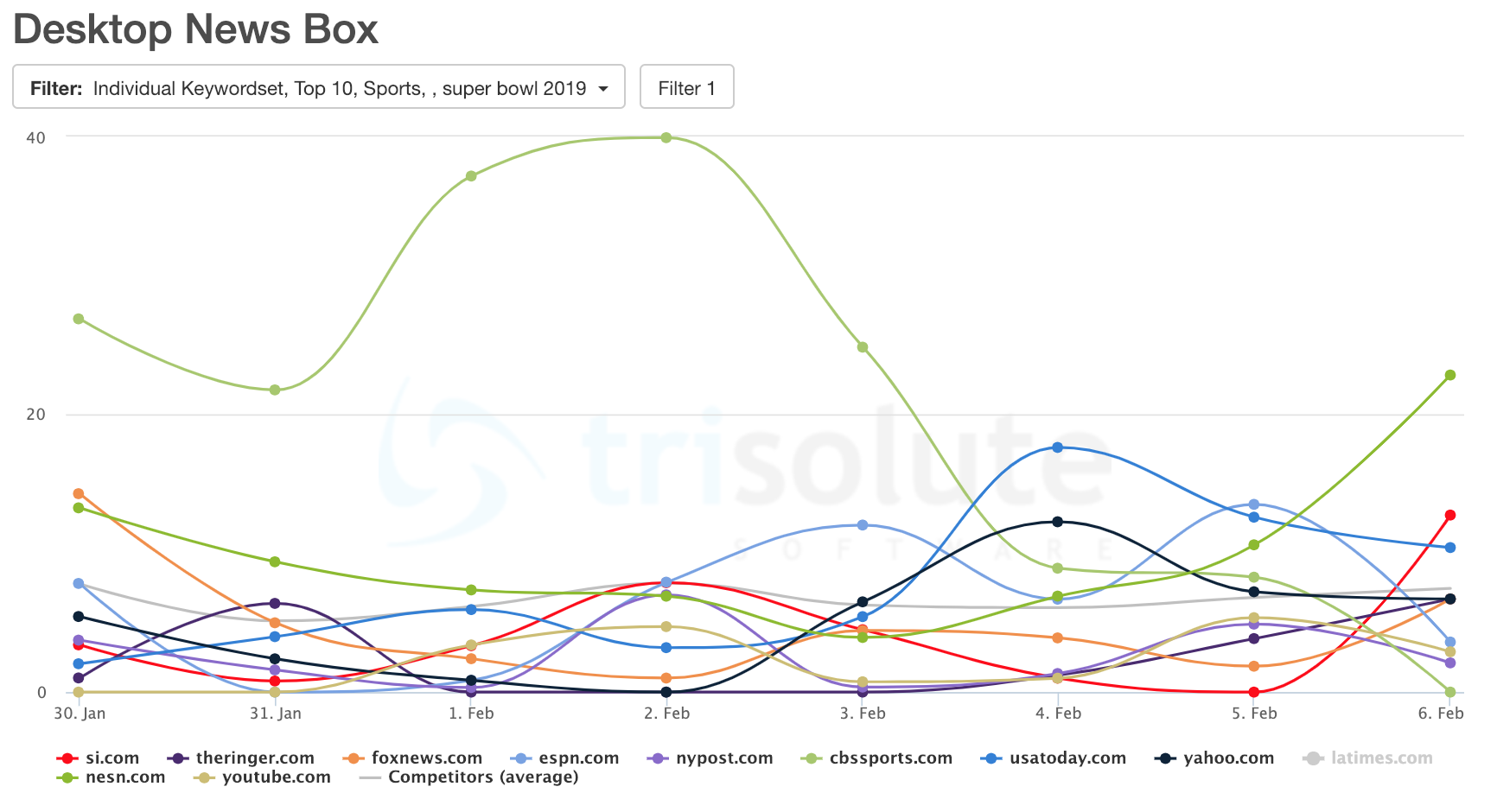 While the No. 1 most visible publisher is the same for the Desktop News Boxes, we have some new entries as well.

In the Desktop News Box we saw different results than we did in the Mobile News Box, similar, but definitely not the same. These publishers appear as the top 10 most visible. We see that cbssports.com will be leading the Super Bowl On Sunday, Feb. 3, cbssports.com’s score is above 24 percent, while the next most visible publisher, espn.com, just barely passes 12 percent.

YouTube, a video platform instead of a publisher, also made an appearance in the list of most visible publishers.

Here’s the rest of the Top 10 on the Super Bowl Sunday, with their highest ranking keyword and visibility score: 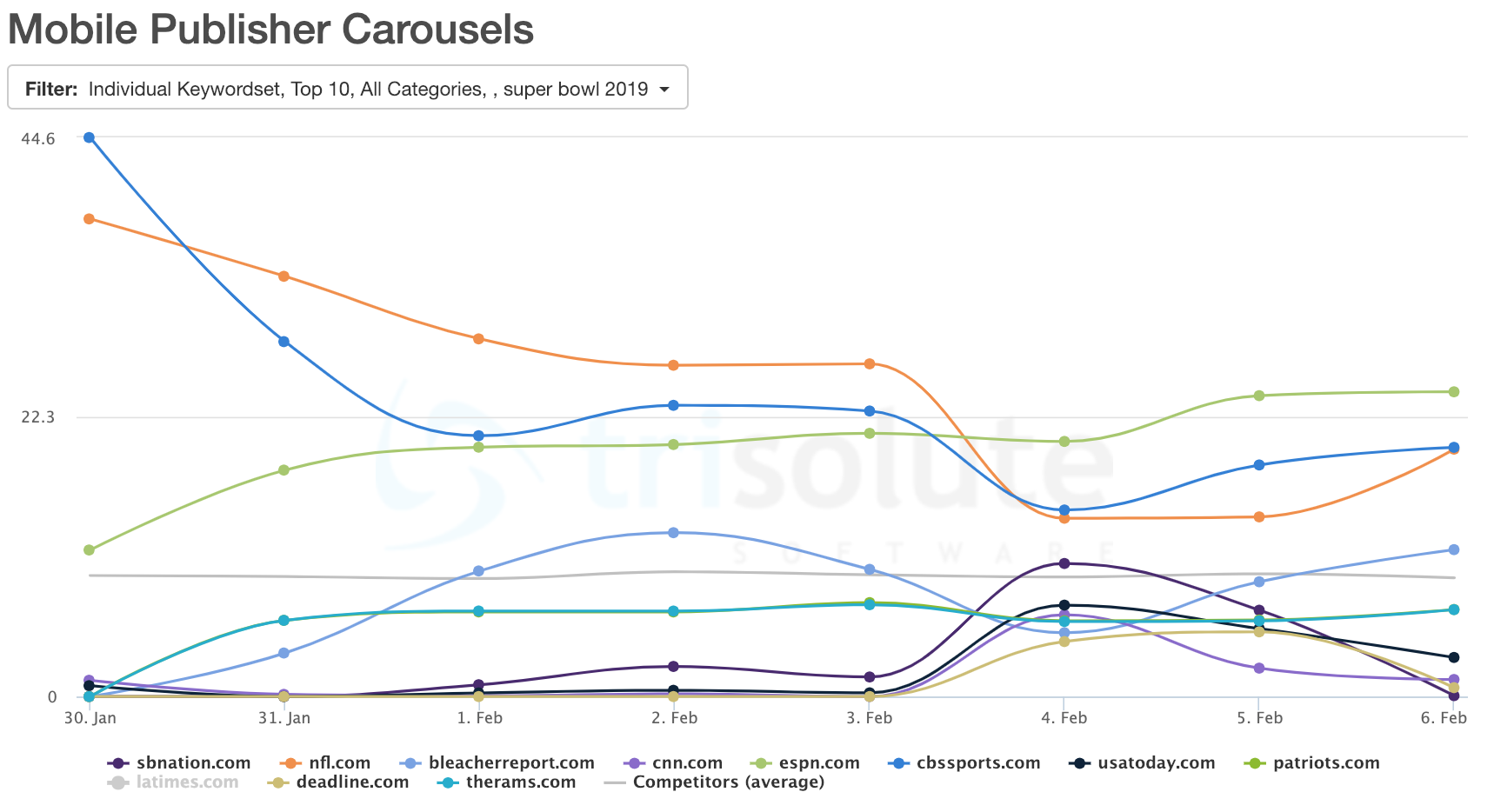 In this case, we’re looking at Publisher Carousels, which only appear on the mobile SERP. While this ranking type resembles a News Box, all of the articles are from a single publisher. More publishers actually had visibility in the ranking type the day after the Super Bowl, let by nfl.com and cbssports.com.

Focusing on Super Bowl Sunday, below are the top publishers including their most visible keyword and score:

For the three ranking types we examined, cbssports.com and nfl.com top the lists. And for the keywords that made up our keyword set for this analyses, there was often more visibility after Super Bowl Sunday than during the actual event.

Need to know when your article ranks in Google’s SERPs? There’s a slack alert for that, from the News Dashboard