Read on for the analysis of the most visible news publishers September across the following U.S. news-related Google ranking types: Mobile Google News Boxes (“Top Stories” on the SERPs), Google News and mobile-only Publisher Carousels.

The News Dashboard is an analytics and SEO tool that looks specifically at Google search visibility. All of the Google News categories are considered within this analysis. Those include US, World, Local, Business, Technology, Entertainment, Sports, Science, and Health.

We also use our weighted visibility score. This score is calculated using the Google News and the total number of rankings or thousands, if not millions of open spots on Google News as a whole.

Below, you can see each of the Top 5 publishers’ overall visibility in the month under the Mobile News Box analysis. 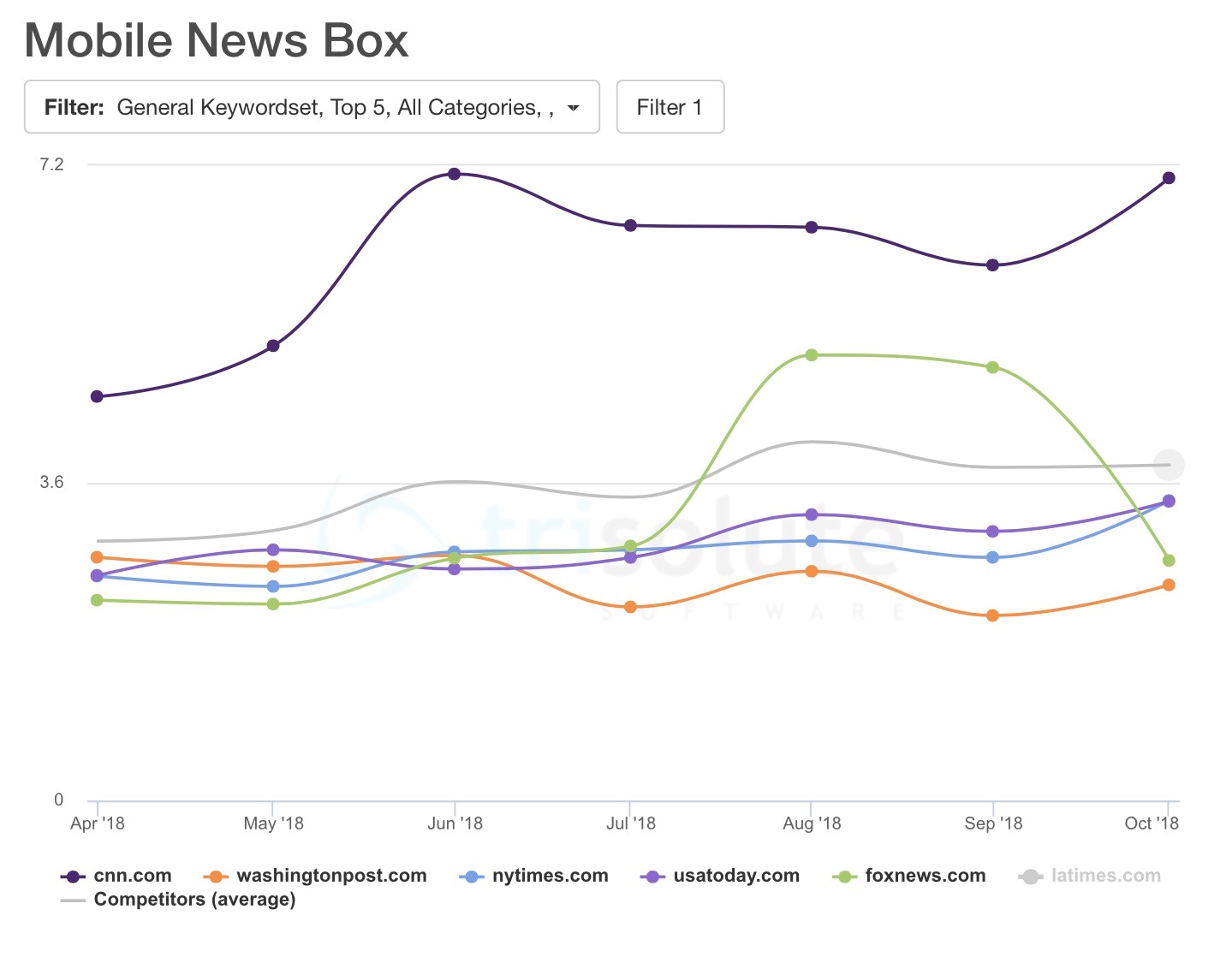 This analysis, like others in the past, considers the entire Mobile News Box. This includes the text and AMP and non-AMP carousel portion – in other words within the headline, as well as picture ranks.

It is clear that CNN has dominated as the top publisher.  Similar to April, Fox News moves from Position 2 to Position 5 by the end of September.

Not only does the News Dashboard tool rank the Top 5 publishers, but it also gives you the capability to analyze the specific keywords they were visible for. 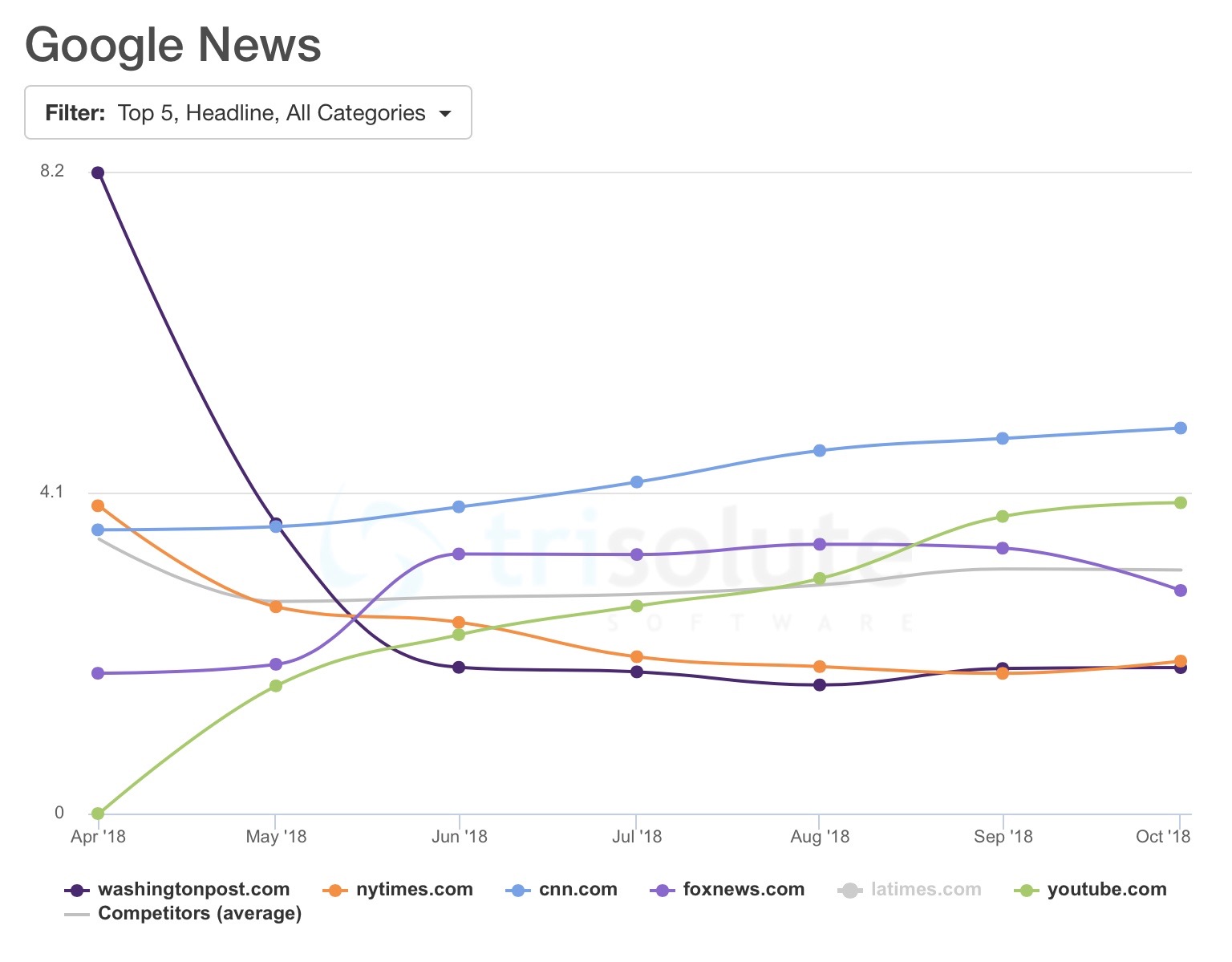 Looking at a publisher’s visibility in Google News, meaning news.google.com, we can really see the impact of the Google News redesign in mid-May.

CNN has been the outlier – maintaining a steady visibility. However, YouTube is a new “publisher” we see gaining visibility and landing in Position 2 for September. As part of the redesign, Google said it would be including more video in Google News. This seems to be coming primarily from YouTube (as you can see the visibility line that starts near the redesign date), while the videos themselves are of course created by news publishers and uploaded to the platform.

There has not been a significant change in the Top 5 publishers since the spring. The Washington Post has gained more and more visibility, just above the New York Times. 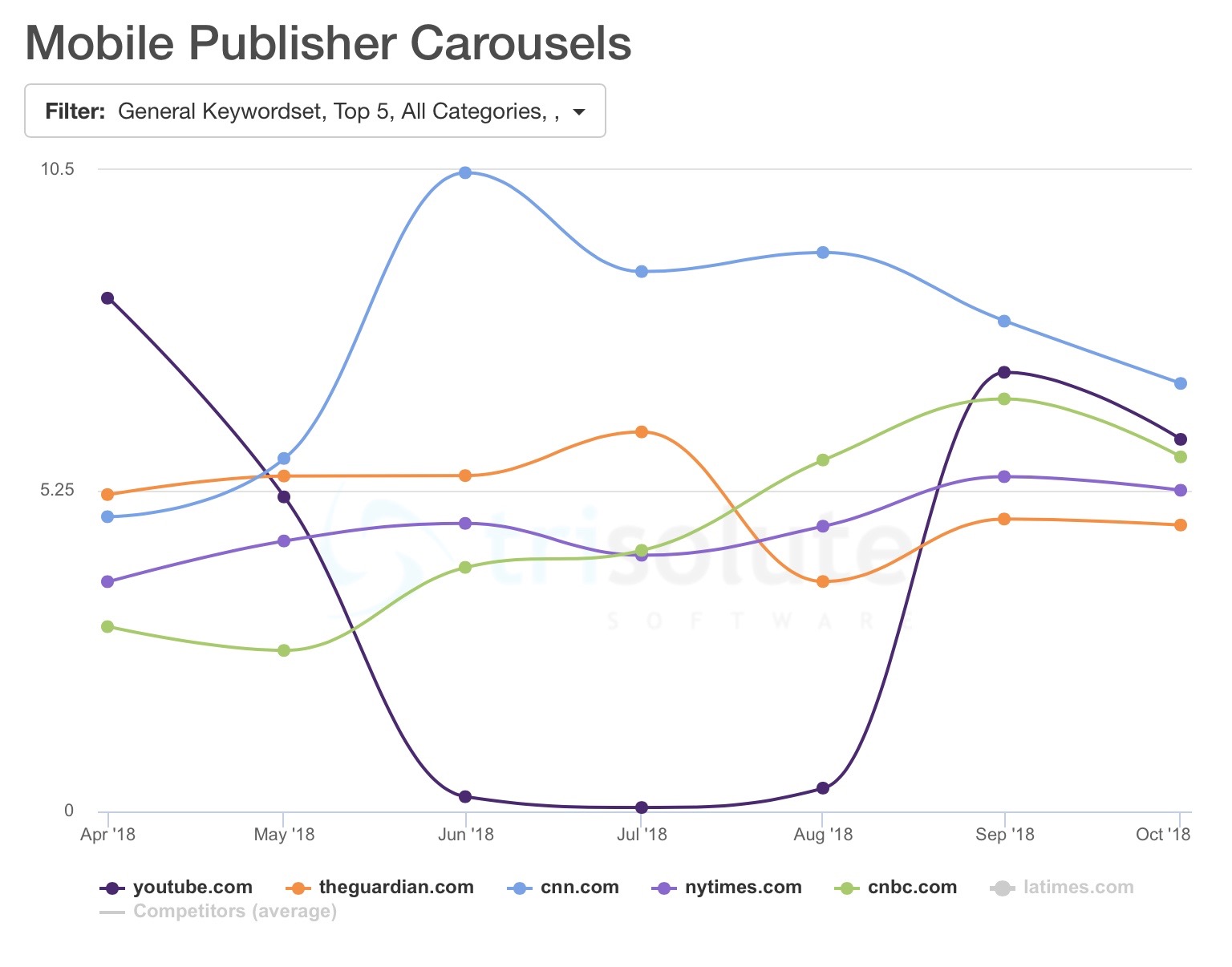 This last category will look at a ranking type that’s only on the mobile Google SERP and looks similar to the carousel portion of the News Boxes, but with articles from a single publisher. The Top 5 publishers during September 2018 in the Mobile Publisher Carousels have seen a substantive change.

Over the summer, we see YouTube taking a huge hit and dropping down. But by the end of September, YouTube overtakes the New York Times, with “apple” as its most visible keyword.

If you find any of the information from this analysis interesting or usable for your own site, you can learn more about how to gain full access to our News Dashboard tool here.

U.S. search index: Were you one of the most visible news publishers in Google News for 2017 – and their top keywords