O.J. Simpson is back in the news: Which publishers topped Google News search visibility?

Flashback to 1994 (or the news coverage you’ve seen of it since then): O.J. Simpson is driving the now-infamous white Bronco through LA, leading police in a chase that was broadcast nationwide. While the spectacle of Simpson’s murder trial is now more than 20 years old, he again landed in the news lately for his parole hearing in Nevada.

The football star was granted parole after being sentenced for armed robbery and kidnapping, and media outlets are reporting he could leave prison as early as this October.

We used the News Dashboard – an SEO and Google News optimization tool – to dive into which news publisher had the most search visibility for Simpson’s parole hearing on Thursday, July 20, 2017. This analysis follows the same format as looking into who led search visibility for the “Game of Thrones” Season 7 premiere.

Across the desktop and mobile news-related ranking types, all of the Top 5 are “old school” major news outlets, and a majority of them are known for their broadcast component. We’ve seen with other news events that are live-streamed and broadcast that Google News searchers might be more likely to choose a website associated with video.

If you do news SEO and Google News optimization or continuing Simpson coverage is in your content plan, check out who’s getting ranked, and how you can do better, below.

First up is a look at the desktop rankings for the parole hearing. The hearing is an interesting analytical topic because it’s part top U.S. news, part crime story and part entertainment story – much like the “trial of the century” Simpson was at the center of through 1995.

Seeing the trend of these more traditional media websites rank at the top of mobile search visibility is certainly more unusual.

The publishers making up the Top 5 in Mobile Visibility Overall are quite similar to those in desktop – which is fairly unusual.

We do see a shift among the specific top publishers for mobile, however: NBC News and the New York Times drop out here, replaced with CBS News and USA Today. It’s also interesting to note that both the Times and USA Today are more known for their print than broadcast offerings, although both have a hefty amount of video online.

When narrow the mobile analysis down to just AMP Carousels – a subset of mobile News Carousels that only include Accelerated Mobile Pages, which Google has said it favors – we see no change of Top 5 publishers, only to their positions. 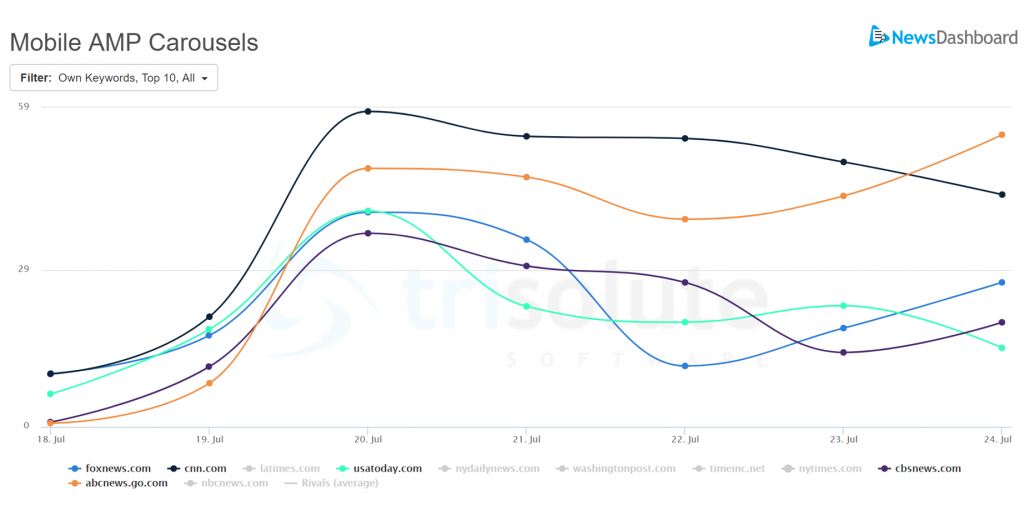 When we narrow down the mobile ranking types to AMP Carousels, a couple of publishers switched positions.

CNN and ABC News remain safely at the prime positions, and the following three do a bit of a shuffle. Again, it’s important to note that a publisher will not rank at all in these carousels if they do not implement AMP on their website.

Finally, when we switch over to Publisher Carousels in the mobile realm, NBC News has returned to the Top 5, with CNN and ABC News continuing their hold on Positions 1 and 2. Publisher Carousels are similar to News Carousels but are made up of multiple articles from the same publisher that cover the same keyword.

While Publisher Carousels are often most popular for sports stories, these kind of carousels also make sense for this quickly updating story.

One of the most interesting findings of the analysis: CNN was far and away the top publisher in search visibility for this topic, whether in desktop or mobile.

As stated above, the winning positions of traditional publishers that are mostly known for broadcast coverage is unusual to hold across desktop and mobile. It’s interesting to consider how the multiple topicality of the Simpson parole hearing – easily fitting under top U.S. news, crime and entertainment – might be influencing the search visibility.

And when we add in the fact that these same publishers were around for the initial Simpson court coverage, we have another layer to consider.

If you’d like to see a similar analysis for your news website, or learn more about how we use the News Dashboard, sign up for a demo at the top of the screen.