We’re following up on our March 2018 U.S. search index, focusing on news publishers’ visibility in Google from the News Dashboard, with an analysis of April across these U.S. news-related ranking types:

The News Dashboard SEO tool looks at Google search visibility. For this analysis, we’ll focus only on imported keywords – Google News Topics and Google News Related – which are made up of the “trending” or top news topics on Google News at any given time during the analysis. Each Google News category – from Top Stories to Entertainment, World, Sports, Technology and more – is considered.

We use our weighted visibility score, which considers not only if a publisher has an article in a news-related ranking on the SERP for the given keyword, but also where on the SERP that ranking type is located, and where within the ranking type a publisher’s article is located. This reveals more granular information and helps publishers get a better idea about their own visibility, especially as compared to their competitors.

The percentages below are each publisher’s overall visibility in the month under analysis. 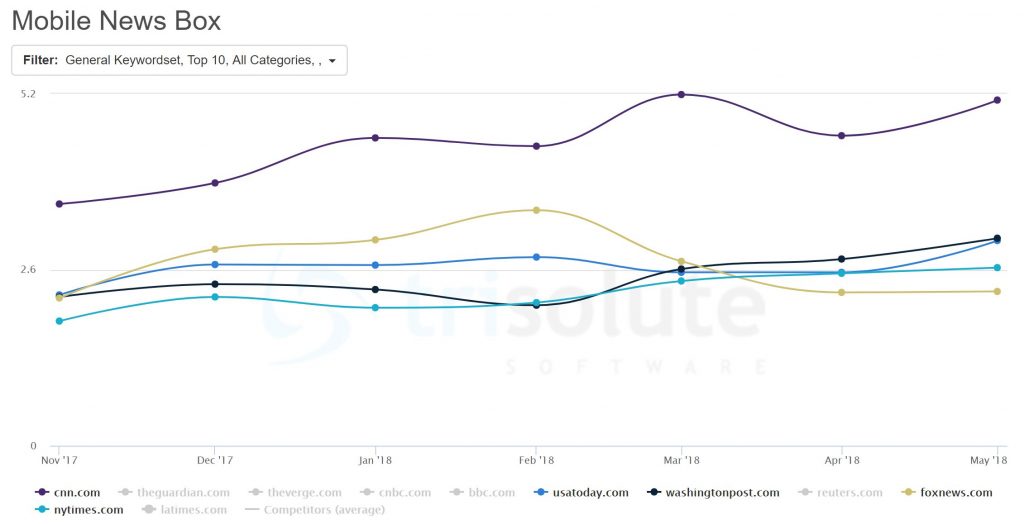 The News Dashboard reveals the Top 5 most visible publishers in the Mobile News Box for April 2018.

For this analysis, we are considering the entire Mobile News Box – both the text links and AMP and non-AMP carousel portion, or in other words the headline and picture ranks.

CNN’s visibility continues to go up and up, but Fox News dropped from Position 2 to Position 5 since March.

In addition to ranking the Top 5 publishers in both months by search visibility, we looked into the data to see which specific keyword each publisher was most visible for. When a publisher’s own name was their most visible keyword, we also listed the next most-visible keyword. 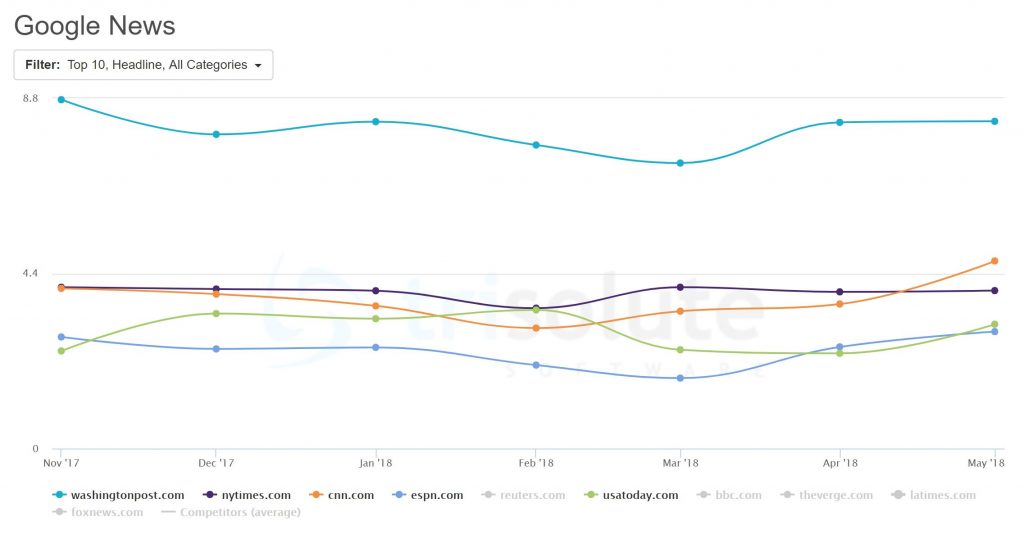 Once again, we see Fox News has dropped lower in visibility in Google News for April 2018.

Next, we took a look at which publishers dominated Google News (news.google.com). Again, we see Fox News has dropped down, in this case out of the Top 5, and newcomer ESPN moves into the last position. The publisher list remains the same from Mobile News Boxes (and last month) with the exception of the sports website. 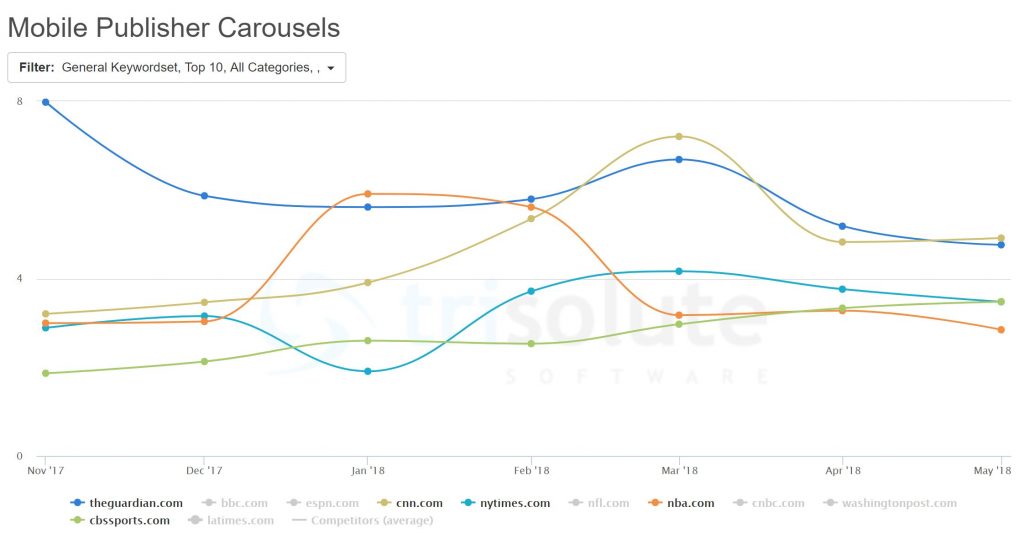 Top 5 publishers during April 2018 in the Publisher Carousels, which appear only on the mobile Google SERPs and look similar to the carousel portion of the News Boxes, but with all the articles from a single publisher.

Going back to the mobile SERPs, we look into Publisher Carousels, which look similar to the carousel portion of the News Box (with only one text link, usually to a landing page vs. a single article), but all of the articles are from a single publisher. This ranking type is usually most visible for sports, entertainment and breaking-news topics.

In contrast to March, two sports-specific publishers have joined the Top 5, with one most visible for a football keyword and the other for a basketball keyword. The Guardian overtakes CNN this month, and switches from “russia” to “syria” as its most visible keyword.

If you’d like access to this analysis data for your own website (as long as it ranks in Google News) – along with near real-time tips on Google News optimization – sign up for your News Dashboard demo today.

You can also try our new keyword cluster feature  – which allows publishers to sort their keywords by category, news event, series, article, author and more. They can also sort by single keywords and create clusters on the fly as they see trends of interest in both dashboards. We have many happy customers who are improving their news SEO daily across Europe and the U.S.

U.S. search index: Were you one of the most visible Google News publishers December-February?