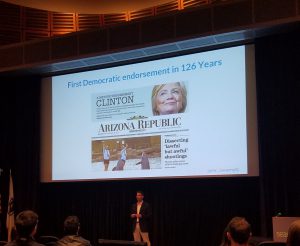 The SearchLove Boston 2017 conference from Distilled just wrapped, with plenty of thought-provoking discussions about SEO theory and tactics.

While the event is primarily aimed at digital marketers, journalism/news SEOs would be pleasantly surprised with how much information applied to their niche, from being smarter about branded content (yes, media organizations need to manage their brand and reputation, too) to progressive Web apps (hello, Washington Post) to machine learning and how politics, digital marketing and media literacy collide during elections.

Here are the five things journalism SEO analysts and audience editors in newsrooms need to know.

SEO can be tricky for Progressive Web Apps

The Post created their PWA back in 2016, and other publishers have since followed suit – pwa.rocks has a nice list of news sites who’ve created one.

Presenter Emily Grossman used her formidable technical knowledge to show how “to make web-apps indexable (and) optimized” for Google. As the Web becomes increasingly mobile, and Google takes notice with plans to penalize sites that don’t play well there, creating a PWA will put publications ahead.

But she did caution: Unless you’re a developer, you’ll probably need to get one to do this right.

While Vicke Cheung’s presentation was of course aimed at content created by digital marketers and SEOs, she had some great lessons that apply to journalism, too.

As a graphic designer, Cheung has a close eye on how companies and advertisers present their content to grow brand recognition and increase its value. And she knows very well what many newsrooms have discovered: Compelling stories are more and more being told through video, social media and interactive experiences.

She presented a three-step approach:

How? Providing educational content about the area you do business in.

Now: Making your content topical (journalists do this pretty well, we hear).

Wow! Using the entertainment factor and element of surprise to delight customers (aka readers).

Presenter Paul David Madden focused on “the arguments for and against links” in the context of SEO and Google, including the history of link-building and some tactical tips for disavow files.

But he did give a piece of advice that will make SEO analysts everywhere – and perhaps especially in news – groan: Google Penguin’s definition of “real-time” crawling after you make changes is as soon as it’s crawled again. And that can be weeks or even months, depending on the page and situation.

While “when will my story rank/update on Google” is one of the most common question for news SEOs, don’t let this discourage you too much. Since journalism sites are providing constantly updated content on topical subjects, Google should get the idea continuous crawling is the best idea.

Expand how you research story keywords

Presenter and all-around SEO guru Rand Fishkin gave us the tools to make analytical, bias-free decisions on strategic marketing for brands. But one of the key tips he gave that could easily be used with news stories.

He suggested to look at keyword volume for words around the problem you’re solving, instead of just the solution. Of course he meant this in terms of the problem a business is built to solve. However, if you have a story describing a problem – for example, a local epidemic of opioid overdoses in a community – you might consider optimizing the story for medications, organizations and tactics that are working to help the overdoses. On the flip side, if your story is about a solution to a problem – such as a mentoring group for kids to keep them away from gang activity – you could look at keywords for the problems the kids would face without the program, as well.

At first glance, the session “Did Politics Break the Internet or Did the Internet Break Politics?” from Jeremy Gottlieb looked like the easiest for the journalism SEOs in the audience, and he did deliver.

After breaking down some interesting lessons from the past few presidential campaigns in the areas of big data, online fundraising and how primarily negative media attention seemed to help instead of harm President Donald Trump, he tackled the white-hot topic of fake news – on both sides of the aisle.

The market saturation of “fake news” websites and incredibly role they played in the 2016 election can’t be understated for anyone in the journalism world. Gottlieb’s presentation is a stark reminder that anyone who ISN’T fake news needs to stay on the cutting edge of channel distribution and online marketing, to help fight the tide.