5 most visible publishers for the federal election in Australia

24. May 2019
By Freya Dombach service@newsdashboard.com

The elections over the weekend have brought some unforeseen results and the Liberal-National coalition under Scott Morrison was once again able to secure the majority in the lower house. Of course, publishers all over Australia and over the world have been reporting ever since. So we want to take some in-depth looks at the publishers on the Google SERP reporting about the election. For this analysis we look at the reporting right after the election – so from Sunday 12 am to Tuesday midnight (Australian Eastern Standard Time). The analysis will be split into three parts. First, we will look at the visibilities for smaller parties in mobile news elements. Afterward we will take a look at publishers ranking in the News Box for Scott Morrison and Bill Shorten and lastly, we will tell you about publishers scoring for general election keywords on the desktop SERP. All rankings are crawled every 15 minutes of the visible first SERP results. All keyword sets can be found below. If you want more information on your own rankings feel free to try the News Dashboard today! 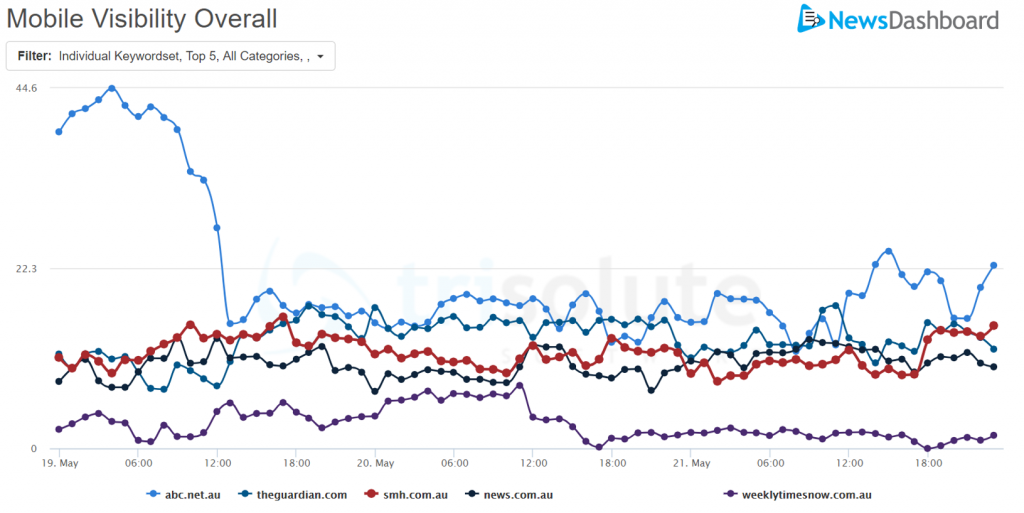 Weeklytimesnow.com.au is a stable competitor for smaller parties visibility.

First, let’s look at the visibilities for all the smaller parties on the ballot. There were around fifty smaller parties competing in the election on Saturday and while not all have been equally on one’s radar, Google Trends still show us some significant search interest for at least some of them. For this part, we look at all mobile news elements, except organic rankings, as they are the least eye-catching on the SERP. Mobile elements include for example all kinds of News Boxes, Video Carousels, and Publisher Carousels. Our score does not only take into consideration if a publisher shows up but also how prominently the rankings show up. You can find more information on all SEO basics in our essential guide here. So let us get into the details. On Sunday abc.net.au had continuously over twenty percent visibility until 1 pm. Afterward, the competition in the leadership section is rather close to each other. On the same day, news.com.au reaches its own best hourly score with 34 rankings total, which is divided between the keywords “labor”, “pauline hanson’s one nation”, “rise up australia party”, “fraser anning’s conservative national party” and “derryn hinch’s justice party”. The best keyword overall for abc.net.au on Sunday was “labor,” it scored 214 rankings and even though they were the leading publisher with more than double the visibility than any other publisher, on that day theguardian.com and smh.com.au score more often for the same keyword. Weeklytimesnow.com.au on the other hand is meanwhile reporting on a whole different topic. Their content ranks most often for “derryn hinch’s justice party” for which only two other publishers in the top five rank – news.com.au, abc.net.au. Overall, their score stayed just below five percent on a daily basis and below ten percent when you look at hourly data points. On Monday abc.net.au loses over 10 percent visibility in comparison to the day before, but ranks more often for the same best keyword “labor”. At the same time, theguardian.com now scores most often for “the greens” and goes from third to the second position. Smh.com.au can also make up some ground. They go from 910 overall rankings on Sunday to 1043 on Monday. “pauline hanson’s one nation” is the keyword for which news.com.au ranks overall the most, interestingly enough abc.net.au only ranks for it on Tuesday. That Tuesday is a great day for all top publishers and four out of five get above the 10 percent hurdle when we look at the daily percentage. When you look at the desktop news elements for the same keyword set, we see the same publishers ranking with just a slightly different distribution.

For the second part of the analysis, we look at the visibility of the two main candidates in the most important news element on the mobile SERP: the News Box. As you see the two most visible publishers are abc.net.au and smh.com.au for the candidates. Right in the middle is news.com.au and on fourth and fifth position are 9news.com.au and theaustralian.com.au. Interestingly, the top five publishers in Australia have more rankings on every day for Bill Shorten than for Scott Morrison. While the difference is not huge, between 3 and 36 rankings per day, Morrison is not the winner in the News Boxes. While 9news.com.au has no rankings on Tuesday. 22 out of 40 of their rankings on Monday for Scott Morrison are achieved with “Coalition set to form majority government“. Theaustralian.com.au, on the other hand, can achieve some whirlwind wins over the three-day-period and goes from 2.71 percent visibility overall on Sunday with 20 rankings to 19.59 percent on Tuesday with 130 rankings.

Abc.net.au rakes in the wins for general election keywords.

For this last part, we are looking at the Desktop SERP. Again, we are excluding organic links, but include news elements such as News Boxes and Video Carousels. As you will see later,  youtube.com links heavily show, but taking out Video Carousels, 9news.com.au shows up in the top 5 instead of youtube.com. Most of all rankings for general election keywords go to abc.net.au, which score over 25 percent every day. The rest of the competition is really close to each other – two publishers smh.com.au and news.com.au are Australian and youtube.com and theguardian.com are international. The guardian.com starts at nearly 20 percent for Sunday, but are down to 10 percent on Monday and Tuesday. Those numbers are pretty impressive though, as smh.com.au’s best daily score is 10.83 percent visibility overall on Sunday. News.com.au has an increase of 5.93 percent from Sunday to Tuesday with the best keyword on Tuesday being “election results” with 97 rankings. 33 of those rankings are from “Election results 2019: Labor Party needs to change its priorities“. Youtube.com always has above 5 percent visibility, but below 10 percent when looking at the daily scores. On Sunday, youtube.com scores 144 rankings for “australia election”, the overall second best keyword of the day. They score about 25 percent of all rankings for the keyword with videos from Sky News, Nine News, DW News, and Dr. Steve Turley. On the other days, publishers of these Youtube channels also show up for the same keyword: BBC News, ABC News, The Star Online, Fox Business. So we have at least three international publishers with BBC News from the UK, Fox Business from the US and DW News from Germany. But, also one rather independent Youtuber Dr. Steve Turley with a particular political view shows up repeatedly.